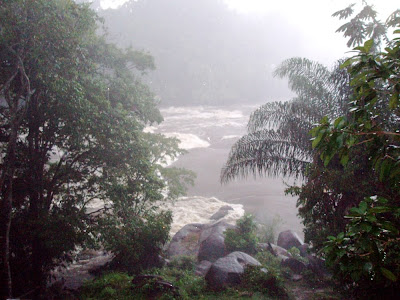 When La Condamine finally reached French Guyana (Cayenne; 26-8-1744) he could replenish the botanical specimen he had lost on his voyage down the Amazon river. He also made an excursion upstream one of the rivers of Guyana. These rivers with the many rocks and rapids may resemble parts of the Napo river (see map above), where he survived several accidents wetting papers, instruments and, probably, his quinine seedlings.
When working in Ecuador in 1737, La Condamine and Jussieu (another member of the expedition) described for the first time in a scientific way the quinquina-tree. In 1742 the tree was named Cinchona officinalis by Linnaeus. The medicinal properties of the quinine-containing bark, however, were already well-known since the 1560s. La Condamine took 8 plants and seeds with him down the Amazon. But because of the sinking of his boat on several occasions these did not survive.

Likewise, we went up the Coppename river in a motor boat (korjaal), which took us about 3.5 hours to Witagron and another 3.5 hours to the Raleigh falls. Before arriving there we suddenly saw, with the sun in our back (i.e. in the north!), the Voltzberg, sticking out above the woods; a magnificent sight! 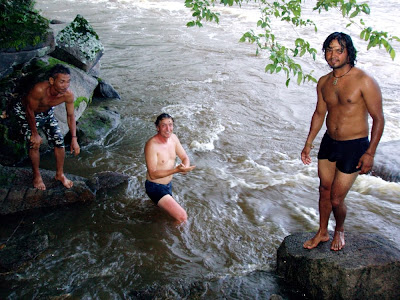 Doleh, Hilbert-Jan and Boudewijn: they felt the shock of an electric eel!

We camped at Lolopasi, meaning “rolling road”. Here, everything becomes moist in the humid atmosphere created by the rapids or falls (“vallen” or sula’s). 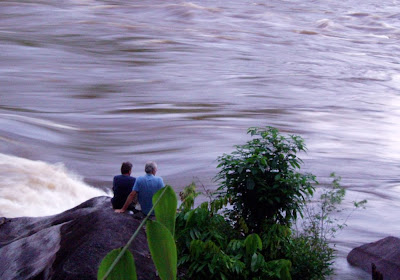 Our guides were Drona Gangaram-Panday and Rajen Jetaeu (cook), both of hindustan origin. Drona told us about his religion, about placing flags (red or yellow) on long poste in the corner of your land whenever you have accomplished something for which you are thankful and about his three sons living in Holland..... Lidie at the lodge overlooking Lolopasi
Trip to the Voltzberg 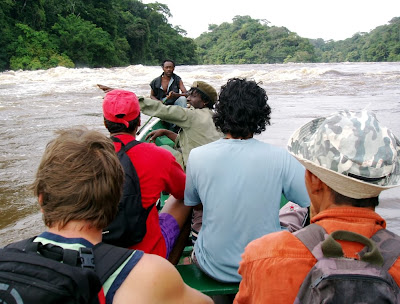 To the Anjumara falls with "Soldier"

On 8-5-2007 a boat took us to the Anjumara falls from where walked through the wet forest (about 7 km) to the Voltzberg, a dome-shaped granite mountain (inselberg) of 240 m high. Our guide from STINASU, Hugo Josua (born in Witagron, and named “Soldier” although he had not served in the army), led us up the mountain on bare feet; we followed his directions very carefully and understood why this trip would have been impossible when it would have rained. 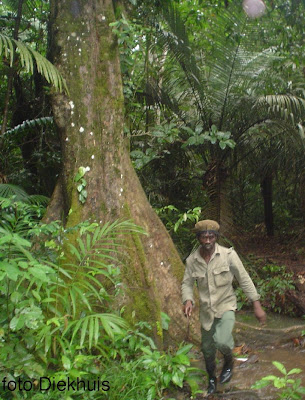 Our guide "Soldier" or Hugo Josua from Witagron 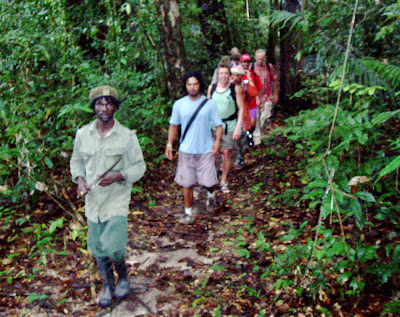 Following "Soldier" through the wet forest
We admired the knowledge of both Doleh and Hugo about the many trees, fruits and flowers. They showed us “Gods tree”, the Kakantri or Bushy Gado, the Ingipipa from which you can make pipes, the Apoketa tree used to make paddles, the Apokonnie or iodine-tree used to heal wounds and the Ingiprasara, used to make fish-traps; the fruits from the Bugrumaka-palm eaten by pigs and the Podosiri-palm with its beautiful red roots. 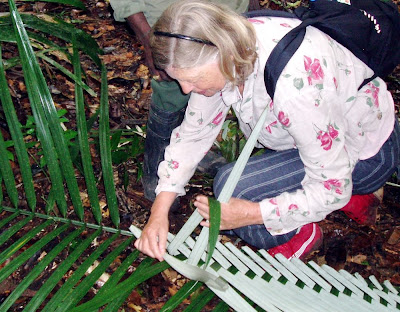 Learning how to weave palm leaves 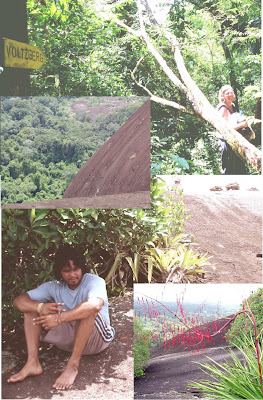 On the Voltzberg, trying out bare feet? 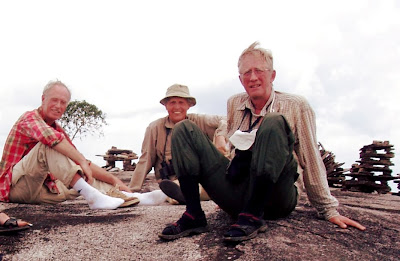 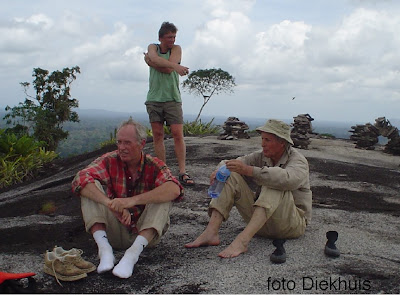 Upon return to the “Hammock camp” on the lower plateau, Hugo was willing to lead Boudewijn and me to the lek of the rare Cock-of-the-Rock (Rupicola rupicola), another 3 km up north. I could hardly keep up with Hugo who was almost running through the dark forest on rubber boots that were much too large for him. Two times he was not certain about the path he had taken, but when we finally heard nearby a loud cry of a cat, he said that we had arrived at the place. Just as the Snowy Egret lights up silver-white when standing on the river shore, so these birds flashed their bright orange colour under the dark trees. 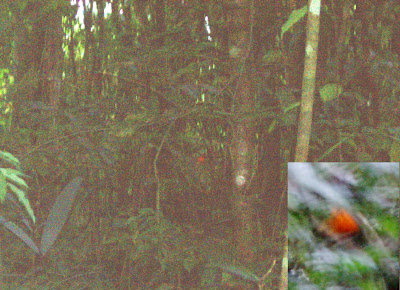 The Cock-of-the-Rock: we saw about 6 males!
I was too nervous to take a sharp picture (but see the site of Surinam birds by Jan Hein Ribot; click "Rotshaan"). On our way back we saw a beautiful turtle. Within 1.5 h we were back again at the Hammock-camp, exhausted but very satisfied. 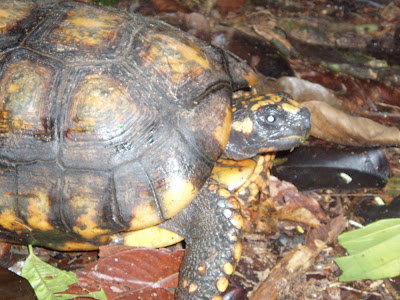 A beautiful turtle on our path.... 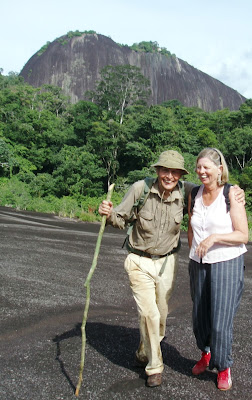 Exhausted, but we had seen the Cock-of-the-Rock!!

When we finally came back at the Anjumara falls, we hardly could find the place where the boat would pick us up! Because of the rain during the past days, the water had rised at least 1 m.

On 9-5-2007 we walked from Lolopasi to the Moedervallen. Again Hugo and Doleh told us about the trees and fruits: the white-and-yellow of the fruit of the Hevea tree (bolletrie- or balata-boom), the red fruits of a tree called “tingy (stincky?) money” and the yellow of a jackfruit (bos-katahar?). But we also saw the Orokuku or bushmaster, 1.5 m long and quite poisonous. After hearing the various sounds of the “Okopipi’s” everywhere, we finally saw one of these little frogs! 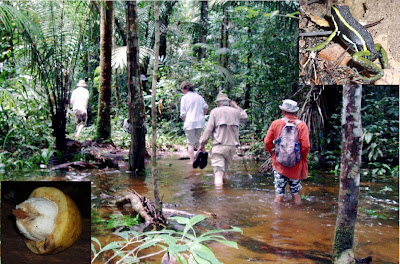 Fruit from a rubber tree (Balata), high water and an Okopipi 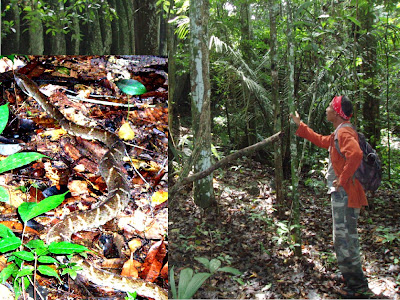 Yesterday we were alarmed by two tucans making a lot of noise. The reason was a visit by 4 baboons (Red howler monkey), one carrying a baby, high up in the trees above our lodge. This time the alarm was given by crow-like birds, probably Cayenne Jay’s: again it was a warning for the arrival of monkeys, this time Black Spider monkeys!
Because of the increased water level and the rapids in front of Lolopasi, two boats came to fetch us and brought us to Fungu. One of the boats was named “NEX NO FOUT” (nothing wrong), the slogan of the political party (NDP) of Desi Bouterse. 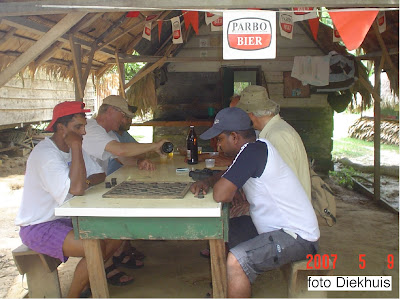 Downstream, it took us only 2 hours to reach Witagron. After lunch and a walk through this Marron-village, we continued downstream, passing a large cargo-boat filled with granite stones. From where did it come?
Then, our boat stopped: water had run into the motor and there were no tools to repair it.
Slowly the cargo-boat came along, stopped and allowed our boat to fasten to its side. We were not the only “guests”: two small fishing-boats were hitch-hiking also, attached to the other side.
The granite came from Apura at the Corantine river. Because the cargo-boat could not sail the Atlantic ocean, the boat had gone up the Nickerie river and had reached the Coppename river via a natural canal connecting both rivers. So, the natural Casiquira canal, connecting the Rio Orinoco with the Rio Negro (see map above) and studied by La Condamine and later by Von Humboldt, is not that unique! 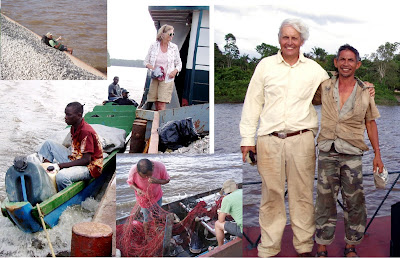 We were lucky and still arrived in the early evening in Paramaribo, where we had a nice dinner (“sauto”) with Drona and Rajen. Finally, at Camp David, we enjoyed the shower, the wine and the bright stars.....