Marco Angelini and Thomas Beller in Milan - The Axiostar + Camera

To all those friends who contributed to the “Microscope for Salatiga”,

Remember that I wanted to bring a fluorescence microscope to Salatiga after my retirement in 2005?
The idea arose in 2000, when I visited my former student, Lusi Dewi, in Salatiga.
The microscope itself (a Zeiss Axiostar) was sponsored by Marco Angelini, director of Fraen Company (Milan, It), who developed the LED fluorescence illuminator for it. Thanks to you all I could purchase a Canon Powershot camera (plus adapters). The laptop computer for camera control and archivation of images was sponsored by Ed and Jeffy Aschermann.

We fetched the microscope in Milan on October 9, 2006. Marco Angelini and Thomas Beller were very helpful in demonstrating the LED-illumination. After testing the microscope in Amsterdam and comparing it with our own fluorescence microscope, we sent it off by DHL. In December 2007 the ~25 kg package arrived in Salatiga.

Indonesian connection
Jeffy is an “anak Surabaya”, just as I am an “anak Batavi”, child born in Batavia. Jeffy was born in Surabaya 0n 29 January 1947. Her father (in the dutch army) and her mother (working for the Red Cross) met on the boat Orontes that brought them to Sydney, where they married on the 10 September 1945 (just after the Japaneese capitulation). Her father was assigned a post on the island of Sumbawa, where he accepted the (late) capitulation of the Japanese contingent.
Having studied Indonesian law at Leiden University, he became “Assistent Resident” of Surabaya until 1948, when Indonesia became independent. He then became law teacher at the University of Surabaya, but had to leave the country as one of the last dutchmen in 1958. Jeffy still speaks “bahassa indonesia”.

Search for my father’s house of birth in Semarang
My father, Oscar Woldringh, was born in Semarang on 15 December 1904. He left a picture of the house where he was born, without address.

Upon arrival in Semarang (on 18 October 2008) we walked from our hotel (Metro Hotel) to Toko Oen. There we met a french businessman who advised us to go to the former hotel Bellevue, now Hotel Candi Baru (= New Tjandi), where many old people lived who might recognize the picture of the house. In the restaurant of the hotel we met Sandra and Sigit, who thought to know the house. Sigit brought us to a beautiful, renovated building (Jl. Kyai Saleh #12-14) which was now a school. Inside it looked as a palace and we couldn’t believe that this was the first house of my grandfather, who had just married an english girl, Zilla Warren, in Surabaya (Her father, Arthur Warren, had been Vice-Consul of Surabaya).

The next day, October 19, we visited Mevrouw Wiriasudirja, the grandmother of Aileen A., student at AMOLF in Amsterdam. Her grandma used to make tempe, taoco and banana-wine (from fermented sugar-containing banana’s). She spoke beautiful dutch, but could not remember anymore her recipe. Aileen’s father, Ir. Paul Brotoseno, who came with sister Myra, also recognized the house….. He brought us in his car to the same address! Again we wondered how a young dutch couple could have lived in such a big house.

After this second visit to the house, Paul and Myra brought us to a small Chineese Temple, then to the huge office of a dutch train company (Bataafse Spoorweg Mij), to a fantastic shop/restaurant, where we ate and bought many Indonesian snacks, and finally to a huge, new Chineese Temple complex. 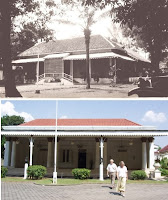 Old and new: could this be the house?