Impressions of my visit to Iran: 29 April to 5 May 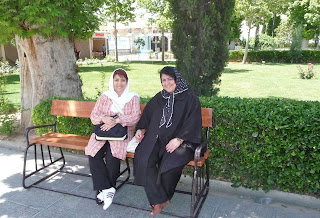 "My guide" and sister in the beautiful garden of the Golestan Palace in Teheran.
I could not testify.....that this country is governed by a "terror regime" as written in our newspapers. During my short stay, I always had the feeling that I could walk freely around. The security at the airports was as relaxed as in, for instance, Brazil. The people I met on the street were very kind, also to my female guide. They laugh, but seem a little shy; in the basars they did not "attack" a sightseer like me; they resembled the people I met in Israel, but did not display their self-assurance; they could wait patiently, except in the traffic. If these people are suppressed, they in any case do not discharge their anger in loud music in restaurants and cars like the Brazilians do and we, perhaps, too. At the university and in the streets, we talked freely about our interests, about religious habits, western movies or Persian culture, but ... nót about politics. 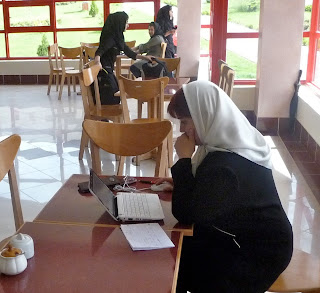 My guide, checking slides before her presentation for the thesis defense session at the Institute in Zanjan 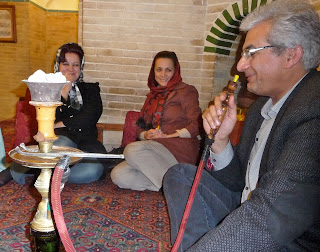 Smoking a waterpipe after dinner at the old Bathhouse-restaurant in the basar of Zanjan. Difficult exercise for my knees....
I did not know that....10000 Rials is 1$ and that the Iranian banknotes show us a story of development from Islamic fundamentalism to Iranian nationalism. The old 2000 bill still shows the Grand Mosque in Mecca. The newer 20000 bill shows the beautiful Imam Square in Esfahan, where cheerful and hilarious schoolgirls asked me: "From where do you come, Sir?", "How do you like the country?" and "Are you an Imam?". On the last 50000 bill the map of Iran shows the Persian Gulf and the symbol of an atom emphasizing the importance of science with the saying: "If knowledge will be in the sky (in the Pleiades) Persians cértainly will catch it". But how can this be reconciled with Islamic teaching (4-5 h a week in primary school) where children are taught biology without reference to evolution? They still learn how to consider the wonders of nature as La Condamine did in the 18th century: all is created by God to be enjoyed and admired by us, Humans. 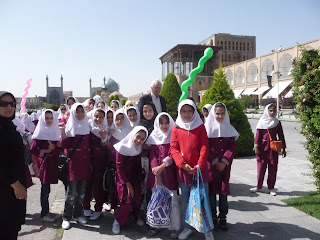 Surrounded by cheerful schoolgirls, wearing an easy-to-wear  "maghnaéh" instead of a headscarf, on the large Imam Square in Esfahan. 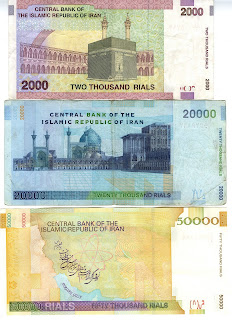 Rial-banknotes showing a development from Islamic fundamentalism to Iranian nationalism.
I did not know that.... Iran has about 77 million inhabitants of which more than 3 million are university students. About half of them is female. After the revolution in 1979 the governement (i.e. Khomeini) stimulated women to go to school and university, but forced them also to wear the chador (loose-fitting coat) and the headscarf.
In this Islamic country I had expected to hear every 5 hours the loudspeakers on mosques or minarets, just like in Indonesia. Fact is that I only heard them once (at 4:50 am) in Teheran and sometimes, shortly, in the airports. This then is one of the superficial differences between Shi'a and Sunni. 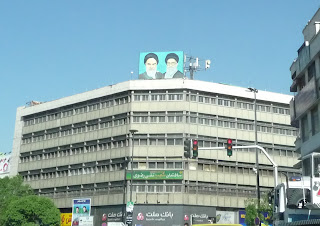 Teheran: everywhere in the streets images of Ayatollah Khomeini (left) and his successor, the Supreme Leader Khamenei (right). They command you "to behave decently" and in return they offer you "peace of mind".
A more profound difference is the use of "prayer stones": small tablets of clay that were often decorated with some simple inscriptions or figures, on which the forehead is placed when stretching to earth during prayer. Sunni's do not use that!
I did not know that....  the Iranians disike Arabs and do not want to speak arabic. After the Islamic conquest (in ~650) the rulers tried to introduce arabic. But thanks to poets like Ferdowsi (a large statue in Teheran honors him), the Persians kept their language. Another famous poet (1195–1226) is remembered on the 100000 Rials banknote: Saadi.

بنى آدم اعضای يك پیکرند
که در آفرينش ز یک گوهرند
چو عضوى به درد آورد روزگار
دگر عضوها را نماند قرار
تو کز محنت دیگران بی غمی
نشاید که نامت نهند آدمی
The poem of Saadi on the 100000 banknote is translated by M. Aryanpoor as:
Human being are members of a whole,
In creation of one essence and soul.
If one member is afflicted with pain,
Other members uneasy will remain.
If you've no sympathy for human pain,
The name of human you cannot retain!
I did not know that....there is more democracy in Iranian governement than Salman Rushdie suggested in an interview when he compared the Iranian Ayatollah's with Nazi-dictators. But the way Imam's get their power is complicated and based on a long tradition in a country that has been ruled by kings for millenia until 1979.
I uderstood from my student-guide that clerics of the Shi'a ("followers of Ali" - the cousin of Mohamed) earn their money and power because, as commanded in religious texts, the people háve to give money to the poor. As this can be a difficult task Imam's come to help and you can now give your money to an Imam that you trust. (Don't we do something similar when a tsunami has occurred and television programs allow us to give our money to get "peace of mind"?).
The Imam has to write theses about new religious subjects (e.g. how should an astronaut pray in space?); he usually has a website and an office. If an Imam gets a lot of money, i.e. when many people trust him, and if he can convince other Imam's that his theses are correct, he can become an Ayatollah and as such a member of the Assembly of Experts: 86 clerics that choose the Supreme Leader. At this moment Rafsanjani is head of the Assembly and the Supreme Leader is Ayatollah Ali Khamenei.
But this story is much more complicated and requires additional reading. Also, I think you have to be a catholic to understand all these beliefs and devotions, not a protestant who thinks he is "non-believing". 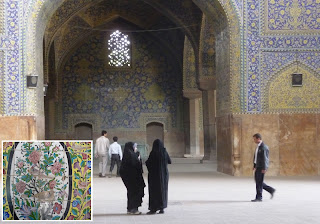 The Jameh Moesque of Isfahan from 771 and rebuilt in the 11th century, decorated with glazed tilework (insert). 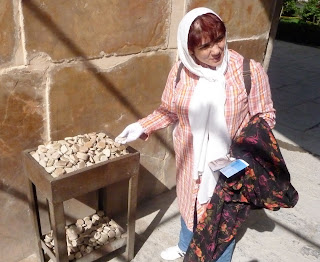 Prayer stones used by Shi'a.
In 1971... the 2500th anniversary of the Persian Empire was celebrated by the Shah. I still remember that the concert was broadcasted on dutch television or radio. The expensive and extravagant feast, of which we still saw remnants of deliberately neglected tribunes, paved the way for the return of Ayatollah Khomeini in 1979. 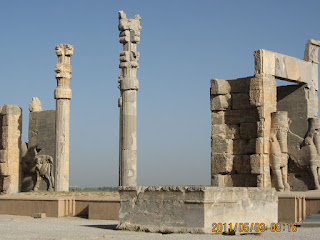 Persepolis
I do not know... whether I have seen the poor people in Iran where 45% of the urban population lives "under the poverty line". What I did see was that, compared to Teheran and Zanjan, the towns of Shiraz and Esfahan looked rather rich and remarkably clean! Not like the poverty and filth of South-American cities. 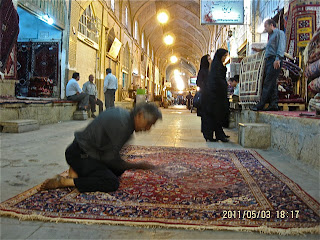 In the bazar of Shiraz a carpet is cleaned by scraping it with a long knife (not visible).
What I did understand is how the war against Iraq (1980-1988) traumatized the entire country. My guide (as a girl of about 8) still remembered seeing the photographs of the war when her father took her to the airport in Shiraz. At this moment it was this town that commemorated for one month the many casualties of the war: throughout town huge posters with photographs had been placed. 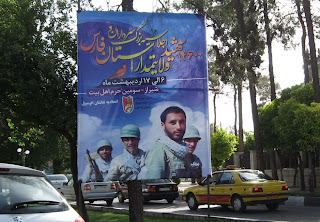 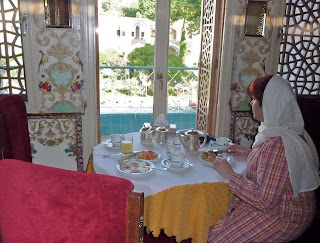 Breakfast with my guide in the magnificent Hotel Abbasi*****
When passing Natanz on our way from Esfahan to Teheran I saw on the electric wires along the well-maintained 6-lane highway, the beautiful Roller ("Scharrelaar"; Coracias garrulus). Not many other birds except for some swallows and huge Hooded Crows ("Bonte Kraaien"). 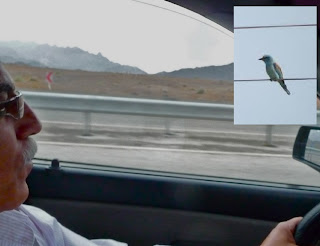 Passing Natanz we saw the Roller or "Scharrelaar";
picture from: http://www.dutchbirding.nl/news.php?id=274
The death of Osama bin Laden appeared in the Iran News on May 3rd. On May 2nd a taxi driver still told us that it could all be a lie. But travellers at the airport had already heard the news via illegal satellite disks...
Did I see signs of the former opposition? No, but I heard about reformists and the "Green movement" and I got the impression that people were awaiting the outcome of the power struggle between the President and the Supreme Leader. They felt that they were "further" than the Sunni-Arabs revolting in the North-African countries and Syria. 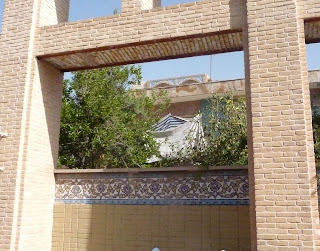 On many balconies in town curtains hide the satellite disks giving access to western TV-programs.
The traffic in Teheran is amazing. It is as if nobody will allow the other car to pass while, without much hassle, a car gets through smoothly whether coming from the right or the left. But my female driver warned me: when they see that you wear a headscarf you have to push harder and be more persevering. If we would drive like this in the Netherlands, with a distance of 20 to 200 cm between the cars depending on velocity, there would be less traffic jams. As there are no traffic lights for pedestrians and zebra crossings seem not to be recognized, I was glad not to have to cross a busy street. 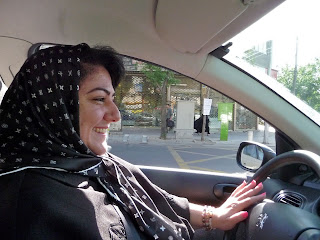 My "female driver" in Teheran traffic, more resolute and faster than most taxi drivers!


Alea jacta est. On January 16, while traveling through the US, I received an invitation from the Institute for Advanced Studies in Basic Science in Zanjan, Iran, to participate in the thesis defense session of a former student.
Going to Iran? Some people advised me not to go to that "vicious country"; others said that it would be an interesting experience... But in that time, the Iranian-Dutch woman Zahra Bahrani (45), was sentenced to death; she was hanged in Tehran on January 29, while we were enjoying a trip to the Monterey Aquarium (see previous Blog). The Dutch governement froze all official contacts with Iran’s “barbaric regime”. Should I go?
In what country was I travelling? Since April 2008, the US carried out 1,099 executions; 3,283 inmates (half of them white) are “on death row” and almost 70% of the people are in favour of the death penalty, although alternative sentences are getting more in favor...
After reading that, I decided to accept the invitation.

With this picture of the late Iranian-dutch Zahra Bahrami, I want to commemorate the more than three thousand people on death row in the US and the people executed in Iran on the occasion of their new year (86 according to Amnesty International).
Visa. When calling the Iranian Enbassy in The Hague I thought the voice was talking a familiar language: hebrew! Later, in the office where women have to wear headscarfs, I heard the greeting "Sálom", resembling the Israeli "Shalóm" (and not the Arabic "Salam").
From where does the Iranian hatred against Israel come? I know that some European historians and Arab leaders and movements (eg. Hamas) deny the Holocaust. But how can a president of a large country as Iran join them? Is it just a helpless act of bullying Israel?
I have many more questions about Iran:
From where does the strong devotion to God come? I know it is not a secular state like ours, where politics and religion are separated, and where we still maintain a "Queen, by the grace of God"....
Why, after chasing the Shah in 1979, did most people accept from Ayatollah Khomeini that there would be an Islamic Republic based on the rules of "one God"? An acceptation that may again occur after the present revolts in the Arabic countries. There were many dissidents that left Iran or were imprisoned after 1979: Will I still be able to see signs of this former opposition? Will I meet people that regret to have accepted the political involvement of the Ayatollah's?
We will see.