Driving through the "green" states of New York and Vermont, the deserts and towns of Iran seem far away. However, the discussions, comments and newspapers here kept reminding me of my Iranian experience. 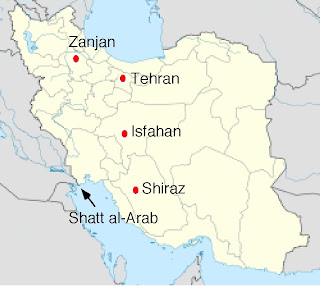 Travels through Iran: from Teheran to Zanjan and back by car; from Teheran to Shiraz and Isfahan by plane and from Isfahan to Teheran again by car. Shatt al-Arab, the region disputed between Iraq and Iran.
The most prominent differences between the city of Teheran (9 million) and the city of New York (8 millon) are, first, the huge and overwhelming advertisements on the New York skyscrapers and, second, the heterogeneity of the people in the New York streets. This heterogeneity and the fact that all those different people can speak freely about politics represents the real force of the "Imperialistic West" for which al Quaeda must be afraid and against which  bin Laden has been trying to install hatred. 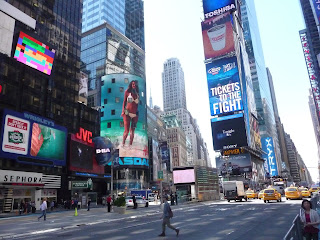 After the modest billboards in Teheran, the advertisements in New York were overwhelming.
The threat of al Quaeda has brought more police and security officers to the streets of New York than I ever saw in Teheran, Shiraz or Isfahan. Reading about bin Laden's death in the New York newspapers, the eruptions of hate among young moslims remind me of the words of Hans Keilson, who was rediscovered here by Francine Prose (New York Times, Sunday Book Review; August 5, 2010):
"B (i.e. Hitler) needed the Jews to project onto them what he dislikes in himself." Is it comparable? Will the hatred towards the West inspired by al Quaeda lead to the self-destruction of bin Laden's dream of creating a Sunnitic Caliphate?
Wall St., NY: the diversity of freely walking and talking people seems to me the real power of the West.
Ground Zero represented to me another aspect of power and strength: an impressing activity of rebuilding 4 new towers next to the two sites of the remnants of the Twin Towers that will stay as a monument. In his Mideast Speech of May 19, 2011, Obama reminded us that al Quaeda is losing "its struggle for relevance" and that "the people of the Middle East and North Africa had taken their future into their own hands." 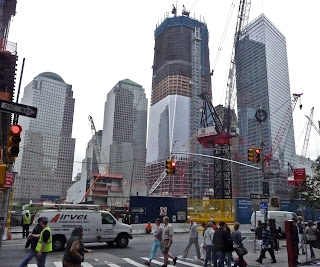 Building activities at Ground Zero, May 2011
He also mentions Iran: "So far, Syria has followed its Iranian ally, seeking assistance from Tehran in the tactics of suppression. And this speaks to the hypocrisy of the Iranian regime, which says it stand for the rights of protesters abroad, yet represses its own people at home." ....and..... "The image of a young woman dying in the streets is still seared in our memory. And we will continue to insist that the Iranian people deserve their universal rights, and a government that does not smother their aspirations."
I was also reminded by an Israeli friend how the US did not side Iran when Iraq attacked Iran in a dispute over the Shatt el-Arab region (the confluence of the Euphrat and the Tigris) starting the war from 1980 to 1988.
In his comment (May 23, 2011) he reminded me how Iran blew up in Buenos Aires first the Israeli Embassy on March 17, 1992 (killing 29 and wounding over 250 people) and then the Jewish Community Center on June 18, 1994 (killing 87 and wounding over 100 people). All this happened well before the arrival of the present holocaust-denier Ahmadinejad!
So, have I been naive regarding Iran? Perhaps , but in his comment on the death of bin Laden ("Bad Bargains"; May 11, 2011), Thomas Friedman (The New York Times) concludes that the main threat of Taliban and al Quaeda lies in Saudi Arabia and Pakistan. It wouldn't surprise me if in the coming years the relation between Iran and Israel-USA would relax.