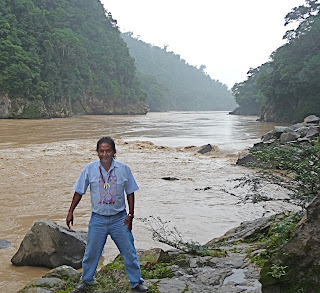 Washurú. Here we were halfway through the Pongo de Manseriche.

Washurú (Merino Trigoso Pinedo)
When driving over the Eje Vial Binacional no.4 from Jaen to Bagua on February 19th 2010, we had forgotten about the uprising by Awajún indigenous people the year before. We drove over the bridge "Puente 24 Julio" at Coral Quemado, where the protest ended in bloodshed on June 5th 2009 at Devil's Bend ("Curve de Diablo").
A few days later, our guide from Loja, Eduardo T., contacted Washurú (señor Merino Trigoso Pinedo, born in 1955 in Santa Maria de Nieva; ex-mayor) an Awajún indian, who was willing to lead us through the Pongo de Manseriche and on to Sarameriza. 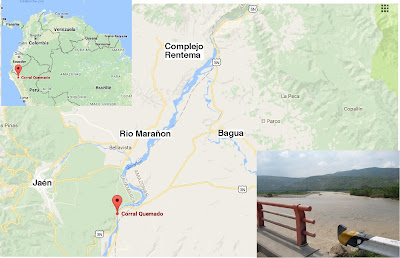 On our way from Jaen to Bagua in 2010 we crossed the bridge at Coral Quemado. Insert shows the Marañon river looking south. The beautiful  "Complejo Rentema" is at the junction of three rivers: Rio Chinchipe, Rio Marañon and Rio Utcubamba.

"Eje Vial Binacional no. 4"
The project "Eje Vial Binacional no. 4", represents a road from Loja (Ecuador) to Sarameriza (Peru). Eventually, this road will be part of a connection between the Pacific and Antlantic oceans. It seems to be a logical road over a lower part of the Andes since La Condamine already took the same route in 1743 (See blog).
The planning is that the last part, the 197 km from Durán to Sarameriza, will be finished in the coming year. 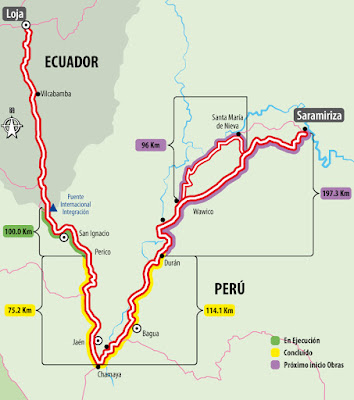 Eje Vial Binacional no.4. In 2010, we took the road to Santa Maria de Nieva and the boat through the Pongo de Manseriche to Sarameriza. Probably, one can soon take the road directly to Sarameriza, from where boats can take you to the Atlantic Ocean.

Accusations and acquittance
In January 2009, the Free Trade Agreement ("Tratada de Libre Comercio") with the United States was implemented. All over Peru there were protests, but the one in Bagua that erupted on June 5th 2009, was the most serious.
On January 21rst 2010, one month before we met him, Washurú appeared for an Investigating Committee in the parish of Santa Maria de Nieva. Here he was questioned under oath about his responsibility for the events on June 5th, that left 34 people killed (22 indigenas and 12 policemen).
Washurú tells the committee that he was at the head of a group of his people that were only armed with spears as used for ceremonies or hunting; that there were helicopters firing tear gas bombs at the about 5000 protesters and that he saw how many of them were injured and some killed by bulltes. He also tells how a group of his people, that had been fully trained in the Peruvian army, had overtaken some policemen that were shooting at short distance on the protesters from an ambush. Eleven policemen were disarmed and shot.
At a session in Chachapoya on May 16th 2016, 52 accused indigenas were heard about the events that occurred at the "Curva del Diabolo", near Bagua. The prosecutor accused señor Trigoso Pinedo of being an instigator of the protest  and asked 35 years of prison. For two others he asked life imprisonment. His defender, the lawyer Quispe, asked for acquittance because the accusations were based on subjectivities and not on proven facts.
Newspapers called it "a court of shame", because nobody of the administration, responsible for the behavior of the police, had been summoned and questioned about the death of 22 indigenas. 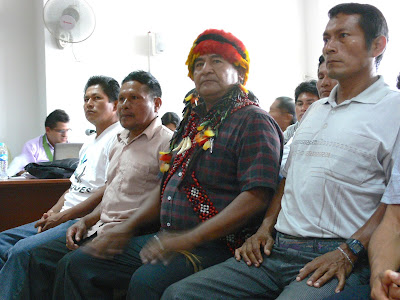 March 2014. "Los inculpados", the accused. Washurú at a session where he is wearing his crown of feathers, belonging to his status as an Awajun leader or "Apu".

On September 22nd 2016 the 52 protesters, accused for the death of policemen, were acquitted by the Criminal Chamber of Bagua. This process (called "Baguanza") is an example of how politicians take decisions without informing and respecting enough the local people. The process is well imaged in the recent movie "When two worlds collide" or "El Choque de dos Mundos".

Washurú in 2010
In Sarameriza, Washurú helped us to buy hammocks (hamacas), he brought us to César, owner of a cargo vessel, the "lancha Monica Imena", that would depart the next day to Iquitos. See this blog of25 February 2010. He organized a good room for us in the only hotel of town, "Hostel Aiku", where we had dinner and where he told us about the difficult situation of the "politicos indigenas"; about discrimination and lack of money. I cannot remember whether he was against the construction of Eje Vial #4, which will open up Sarameriza: the music was too loud and my spanish not good enough.
The next morning, February 21rst 2010, on our way to the lancha, he brought us to the bakery, where we bought little buns (24 for $1.00). We are very much indebted to him. When Eje Vial no.4 is finished, it should be not too difficult to visit him again. 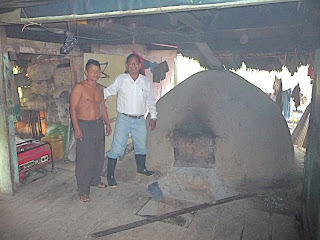 The bakery in Sarameriza, where we could buy our buns for the coming days.