Preparations 2 - The route and corresponding maps


My colleague Antoine Cleef borrowed me a detailed map of the Republica del Ecuador, from July 1991. Helped by Google Earth I could now for the first time find most of the towns and rivers named by La Condamine in his book "Voyage sur l’Amazone". The map above shows Tarqui, south of Cuenca, where he departed on the 11 of May 1743, and Borja, just past the Pongo de Manseriche, where he arrived on the 10 of June 1743. Because he had been informed that he would be attacked by accomplices in the murder case of M. Seniergues, he did not take the direct road Cuenca-Loja, but made a detour via Zaruma.

His description of the descent of the Rio Chinchipé, however, remained unclear. The place Tomependa is not to be found and also the location of Jaen seemed different. Other names like Chuchunga, Cumbinama, Chachapoyas, Escurrebragas and Guaracayo are not on this map.

But most of these names were given on La Condamine’s own map, Carte du Cours du Maragnon (1745), which I found in the book of Neil Safier "Measuring the New World" (Chicago University press, 2008). See maps below.
Only the location of Chuchunga where he arrived on 4 July 1743 remains unclear. La Condamine writes: "Je trouvai a Chuchunga un hameau de dix familles indiennes". Here the indians built a new raft for him, which gave him time to dry his papers that had all become wet when coming to Chuchunga.

Jaen is indicated twice on La Condamine’s map, but neither location corresponds with present-day Jaen west of the Maranon river. Perhaps we can solve this riddle on the spot when we come there next year…. 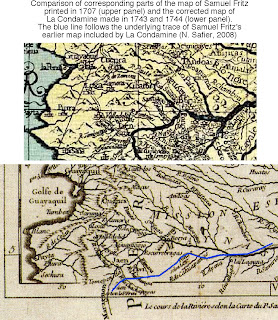