From Cayenne to Paramaribo 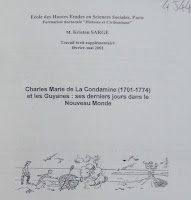 Left: Title page of an interesting work about La Condamine found in the Archives of Cayenne.
Right: First page of the "Relation abrégé d'un voyage fait dans l'intérieur de l'Amérique méridionale....etc." , of which I have been reading a 1981-edition, also found in the Archives.
12/3. Friday. In the morning we first went to the "Archives de la Ville de Cayenne". Asking for information about La Condamine we were kindly given a "Travail écrit supplémentaire" by M. Kristen Sarge (rechercheur), entitled "Charles de La Condamine (1701-1774) et les Guyanes: Ses derniers jours dans le Nouveau Monde". Then they told us there was another book to be found in a nearby building "Bibliothèque Franconie". This appeared to be a little booklet with beautiful drawings (aquarelles) about the voyage, entitled: "En descendant la Rivière des Amazones". I hope the booklet can still be purchased.
In the Bibliothèque we met Sylvie Pappalardo, director of the Bibliothèque, Phil Boré, writer of travel guides of Guyana and Suriname, and Philippe Guyot, director of the Archives, who all gave us useful information. Later we bought Phil's interesting, little book "Balades aux Suriname". 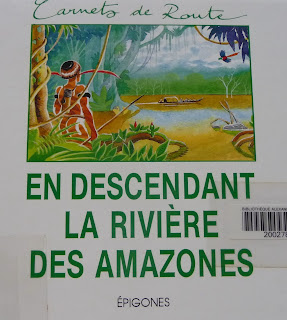 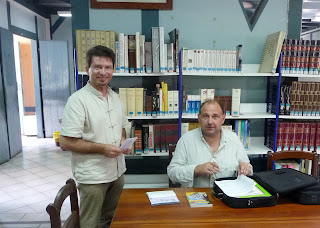 Phil Boré and Philippe Guyot, at the Bibliothèque Franconie, who gave us useful information about Guyana and Suriname.
In the evening we made a short walk to the fort overlooking peaceful, european Cayenne. In a shop we spoke a Guayanese, who told us that he often went to Paramaribo, because "there was life in that town"....
We ate in our hotel and went early to bed. 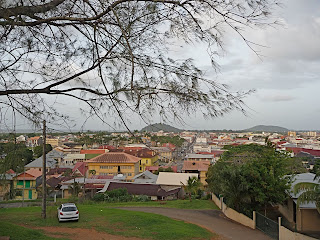 View over Cayenne from the fort.
13/3. Saturday. The mini-bus driver had asked us to be ready at 5:15 a.m. He would then pick us up at the hotel. Other people (from Suriname and Paris) were already in the car. After some more stops throughout the still-sleeping, dark town, we drove to the bus station. But there were still two unoccupied places and we understood that we had to wait until new passengers would arrive. Finally, at 8 o'clock we were with 8 people, a CD was installed and with a deafening beat we departed. Songs about trouble, drugs and love-for-love solidly filled the car. But, after a while (did I had become a littlebit deaf?), I thought that I could better understand these troubled people than our highly-educated academicians in the lab of Amsterdam, listening the whole day to whatever music and nonsense the dutch radio was presenting them..... 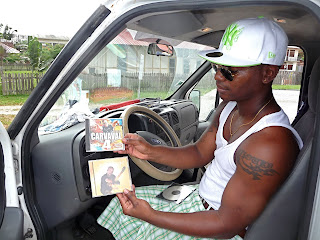 The bus driver proudly showing me his CD's.
In Iracoubou we had to change our bus. When all luggage was transferred, a third mini-bus arrived. The drivers had a loud "fight" with the result that we had to transfer again to the new bus.  We drove over high-quality roads through beautiful landscapes that reminded us of Suriname and arrived at 11:30 a.m. in St. Laurent at the broad Maroni river (Marowijne). Again we were "attacked" by many Creole people who grabbed at our bsckpacks trying to get us in their boat accross the river to Albina. But we could speak dutch now! We chose one boat, went over to the French police, crossed the river and went to the Suriname custumes. And there Dennis came with Hilbert's brother Louis who happened to be in Suriname. Our journey had ended! 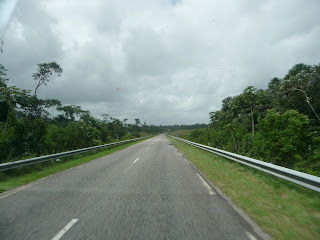 In French Guyana we drove over "european" roads. 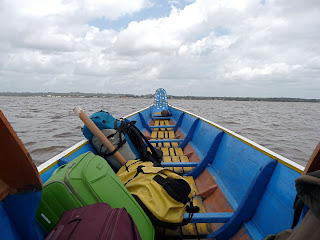 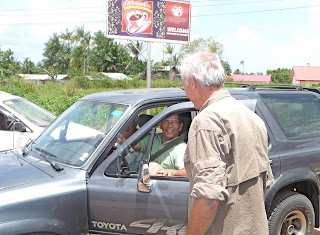 In Albina Dennis Chin-a-Foeng came to fetch us: End of the journey.