Journey to Florida, Texas and California 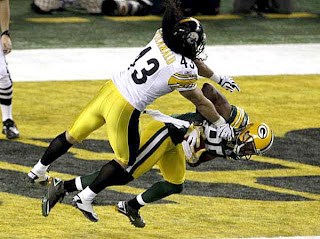 From where in the world did the fear come for anthropogenic production of greenhouse gases and climate change?

Certainly not, it seems, from the regions through which we have been travelling: Florida (Vero Beach, January 16 to 23), Texas (Austin, January 23-26) and California (Palo Alto and Granite Bay, January 26 to February 8). Nowhere one can observe any restriction in driving cars (although smaller cars can be observed, even Smarts!), eating large amounts of meat or consuming clean water. California is the world's 19th largest polluter, but this is perhaps not too bad when considering that it is also the world's leading agricultural and food-production region.
But who can be afraid here? Has not everybody become immune to threats, "super-force" and violence? Watching the Super Bowl XLV ("Steelers" against "Packers; February 6th) on TV one becomes overwhelmed by the velocity and ferocity of the advertisements between the shots of the game.
-------------------------------
Florida, Vero Beach: Our host, A.Z. brought us to luxurious West Palm Beach where we visited the Norton Museum of Art. On the way back we passed MacArthur Beach State Park and saw Roseate Spoonbills "between" the skyscrapers. Apart from such nature parks the whole east coast of Florida seems one huge parkland built up with houses or castles and gardens. The parkings at the malls, however, looked rather empty in this high season..... 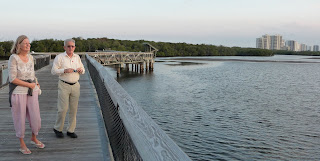 Lidie and A.Z. in MacArthur State Beach Park on Floridas east coast.
-----------------------------
Texas, Austin: With our host Jim W. we visited the places where we had stayed in 1982/3. During my seminar at UT, I tried to explain that DNA regions within the bacterial nucleoid cannot move fast or "jump" (see "Jumping Frog" below.).
Following a long discussion, James W. drew our attention to the famous Eisenhower farewell address on January 17, 1961. In this speech Eisenhower is speaking truthfully about the military industrial complex that seems to drive America to war again and again in the name of security. We have to watch this movie fully later at home, but for now I wonder whether Iranians and Arabs that see this movie would be confirmed in their fear and hatred against the US. 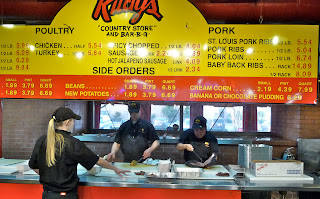 Rudy's Country Store and Bar-B-Q in Austin, Texas: incredible good meat, relatively cheap and in huge amounts.
-----------------------------
California, Palo Alto: When driving from the airport at San Jose to Palo Alto, I saw a huge construction that seemed to be very modern and I wondered whether it represented a NASA station. Our host, L.B. told us, however, that it was an hangar built in 1933 to contain an airship larger than the Graf Zeppelin. The colonel brought us to Moffet Federal Airfield where we visited the museum. 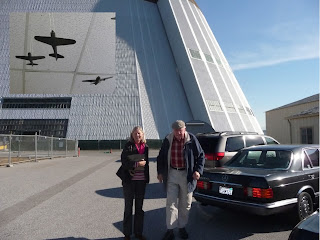 Lidie and LB in front of Hangar One at Moffet airport.
Insert: In the museum I found for the first time a picture (silhouette) of a Japanese Navy-O, the plane that shot the Jeep in which my father was sitting (Tjilatjap, Java; March 5, 1942).
California, Granite Bay: Bob W., principal engineer at Fugro West Inc. in Sacramento CA, warns that dutchmen have to be modest here. Around Sacramento exist areas 6 m below sea level protected by levees (dikes), in a water system larger and more complex than in Holland! Responsible for the safety of the levees here is the US Army Corps of Engineers (compare with the dutch Rijkswaterstaat). According to BW the inefficiency of this large administrative and executive organization that also has to deal with the environmentalists is unbelievable. 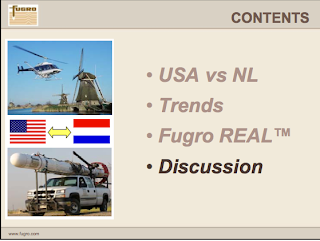 From a presentation on the comparison of Dutch and American levee safety approaches.
Bo and Els W. brought us to Calaveras County where Mark Twain wrote his humorous story of the Jumping Frog:
"'Maybe you don't,' Smiley says. 'Maybe you understand frogs and maybe you don't understand 'em; maybe you've had experience, and maybe you ain't only a amature, as it were. Anyways, I've got my opinion, and I'll resk forty dolars that he can out jump any frog in Calaveras Country.' It was R. D'Ari who suggested to me the connection with "jumping spots": fast moving, fluorescent DNA regions in bacterial cells, which in my view cannot exist....