While preparing our La Condamine&Maldonado-trip it was difficult to find on the map the border between Ecuador and Peru. But this is nothing compared to the map of Israel (Carta, Jerusalem; www.carta.co.il) with its many lines indicating “international boundaries”, “separation of 1974 forces”, “planned borders”, “security fence” and lines between annexed areas and occupied areas under partial or “complete” control of Palestinian Authority. This complexity only increases when taking into account that many of the people let themselves be guided by rules of family-pride and -honor or by a God that “gave them the land”.

Some dutch politicians like D. van Agt and J. van den Broek (like myself not Jewish) think that Israël has the duty and capability to solve the problem (The Rights Forum). However, they seem to forget that the many neighbours (millions) living along these complex borders simply refuse to be practical and prefer to continue the fighting which, they apparently think, gives them more advantage in the future (see also the blog "Israël Palestina Info"). 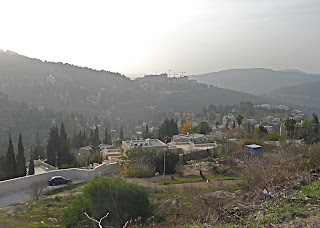 New building: here, in the far distance, the building of Hadassah Hospital;

Driving through the country, from Be’er-Sheva to Jerusalem, HaZorea and back, I cannot say that the Israeli's are wrong: Two years ago I was impressed by all the building that was going on: new roads (e.g. Route no.6), hospitals (Hadasah), malls (Jerusalem), hotels (Golan), villages and whole towns (Jewish Ma'aleh Adumim and Ariel). And it has been going on as if there has been no war. It seems that everywhere the country is developing itself. 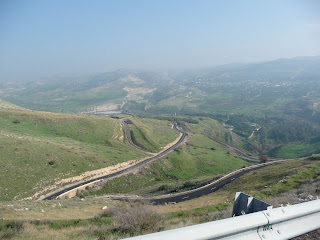 New roads: here, the road to the Golan Heights

And the Arabs? I was told in HaZorea (HM) that not only Jewish towns but also Arabic cities and industrial areas (e.g. near Revava along Route nr. 5 to Ariel) have expanded and have profited from the way the Israeli economy was able to deal this year with the economic crisis. But what do they gain by rejecting every compromise (since 1948) and by refusing to be practical? This time, I only spoke with the same person whom I met two years ago in the guesthouse Mishkenot Sha'ananim, where we stayed. And he still complained that it took him so much time at the border of East-Jerusalem to get to his work. Of course, this is not enough to understand the behavior of the Arabs. 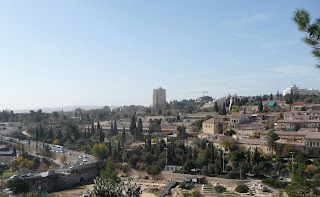 View on Jerusalem from Jaffa Gate.

In the center the guesthouse Mishkenot Sha'ananim

According to a Hamas leader one of the obstacles in peace negotiations is that Israel wants to be a “Jewish state” with no separation between state and religion. But is there an Arab state where such separation exists? And don't we (the EU) recognize the countries with no such separation? I was reminded by a friend (NBG) that when European countries recognized each other more than hundred years ago there was also not much of a separation.
What about the Bedouin and Druze communities in Israël? Driving from Be’er-Sheva north one now sees a huge town in the desert, with green-lit minarets: Rahat (green is the color of Mohammed and has nothing to do with the new green Climate-religion). Driving over Mount Carmel to Haifa we were impressed by the extension of the Druze cities of Daliyat el Karmil and Isfiya. Are these (religious) communities just more practical than the Arabs in the Westbank and Gaza?

And what about Jordan? We went to a place, an old power station at Nahara’im, where Jews and Arabs came to a practical agreement after the disaster in 1997 of 7 girls shot dead by a Jordanian soldier. King Hussein came to express his grief. I wonder what the Jordanians think of the Israel-Palestine conflict. And the Egyptians? They seem to fear the Hamas in Gaza.

Trying to be practical: here, the Israeli and Jordan flags on a dam of the Rotenberg-power station in Naharaim

When observing the people in the streets of Jerusalem or the students on the University campus of Be’er-Sheva (apart from the many Arabic students!) I find the diversity of the people remarkable. They are all Jews, but clearly from many different parts of the world! Is this mixture of “tribes” the reason for the many beautiful people I see? It must be difficult for any enemy to fight such a heterogeneous population. And, for an outsider like me, some of the Jewish "tribes" very much resemble Arabs.... 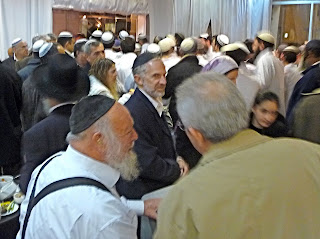 So many different people: here, on a wedding party in Jerusalem