Studying the maps, reading books and e-mailing people that know about Ecuador, Peru or the Amazon becomes more and more exciting. What a pity that our sons, Hilbert-Jan and Marius cannot accompany us; hopefully there will be a next time.  The two of us now have our tickets for Quito!
Although Surinam still seems far away we already paid for our flight back from Paramaribo to Amsterdam. In contrast, Maldonado and La Condamine could only hope that in the mouth of the Amazon they would find a ship to bring them home again. Due to the wars in Europe La Condamine could not join Maldonado on a ship to Spain. Lucky for us, he had to travel to Cayenne, finally returning via Paramaribo and Amsterdam. 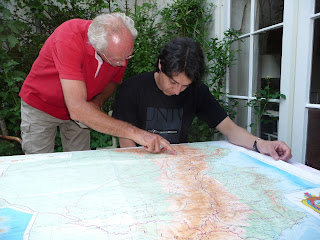 Hilbert and Sebastian studying in Naarden the map of Ecuador: “Where is the Rio Chinchipe?


When preparing our journey it seems that every post should again express our motives or justification for this long trip. Remember that it all started with the poster of Paul Woei (Paramaribo). In its legend Hilbert and I read for the first time the name of La Condamine. The legend stated:
“…The trees stand so close together it is impossible to see the sky from the ground,…This world could really be compared to a huge, dark sea…” words of Gonzalo de Oviedo, explorer of the New World in 1526. Maria Sybilla Merian, one of the earliest naturalist (1699-1701), to observe first hand the plants and insects in the tropical New World, published the results in her book “METAMORPHOSIS INSECTORUM SURINAMENSIUM”. Fifty years later the Swedisch botanist Carl Linnaeus classified specimens from Suriname, e.g. quinine. In 1744, La Condamine made a stop in Paramaribo after a long journey from the Andes down the Amazon river. Botanical specimens  which he had lost on his way were replaced. 85% of Suriname land area is still covered with the rainforest. Biologist and naturalists continue to be attracted to study the exotic species in this “haunting green hell”. A journey through the rainforest is an intensely, overwhelming experience for all the senses. The sounds, colors, fragrances and sights reveal to the open mind the complexity and dynamic diversity of life and the amazing adaptation of each organism; it heightens perceptions and understanding of the fragile interdependence of all species, including the human.”
It was this description found in 2005 that initiated the idea of making this journey “in the footsteps of La Condamine and Maldonado” 5 years later. 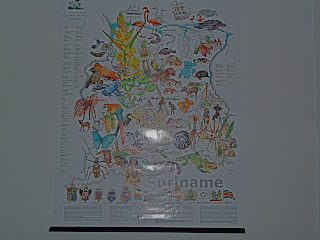 The poster by Paul Woei, Paramaribo, Surinam (2004). In its legend the name of La Condamine.


In his book “Measuring the New World”, Neil Safier described how La Condamine receives, at the end of his journey, a “golden monkey” from the  governor of Pará (Belem). I wondered what monkey this was and whether we would still be able to see such a beautiful creature. Even with the help of my friend, Henri Wijsman, we were not able to find the name of this golden monkey. My friend, however, had met thé primatologist of the Amazon, Marc van Roosmalen in 1976 at Foengoe Island in Surinam, when van Roosmalen started his studies. See his book “Blootsvoets door de Amazone” (which will appear in an english edition). Upon my request he immediately answered that it was the Amazon marmoset Mico argentatus, previouslay named Callithrix argentata. Now an image was readily found on Wikipedia!
La Condamine described the monkey as follows: “a golden-haired monkey reputed to be the sole representative of his species. The monkey’s tail, in contrast to a body whose sheen radiated like “the color of  the most beautiful blond hair” was of a dark and lustrous brown, almost black. But most impressive of all were the bright red tints with which his ears, his cheeks, and his muzzle were adorned, “a vermilion so vibrant,” in the words of La Condamine, “that one could hardly be persuaded that the color was natural.” (p. 238 in Neil Safier’s book). 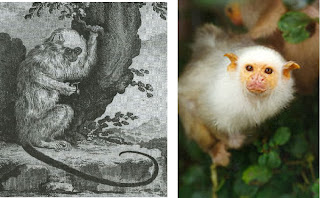 Sebastian found a nice hotel for us in the center of Quito. However, looking for hotels ourselves, we found the Hosteria La Cienega, where according to the description on the website La Condamine has been visiting:
“The hacienda has played host to a number of important historical, social, political and scientific events on a national and international level.  The wise French intellectual Carlos Maria de la Condamine arrived in Quito with Luis Godin y Pedro Bouger in 1736.  Six years later, after two hundred years of inactivity, Volcano Cotopaxi erupted, provoking the scientists to move closer to the outskirts of the volcano.  Carlos Maria took up residence in La Cienega, resulting in the beginning of a long and meaningful friendship between the academic and Marquez de Maenza.  “
Later, in 1802, Alexander von Humboldt stayed there. Perhaps, as residents of the city of Naarden, we also have to stay a night there because La Cienega and our town bear the same double-headed eagle in their arms.