From Cuenca to Loja

14/2. Sunday. In the morning Eduardo and Anna come to our Hotel. We first go to a friend of Eduardo, Mario Brazzero who is waiting in front of the oldest church of Cuenca: "La Catedral Vieja"built in 1573. We admire the private chapels that do not belong to the church (!), the paintings with their "trampantojos" (trompe-oeuil) and the old organ, the music of which must have been heard by La Condamine. 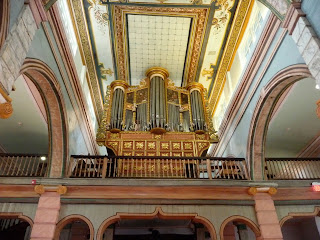 The old organ which La Condamine could have heard!
At half past 9 we head to the south and soon come to the mountain described in the book of Neil Safier (see former posts). At 10:30 we are on the top of the Francesurcu (the mountain of the french?), having taken 643 steps. Our GPS gives the following position: S 3° 0' 28''; W 79° 2' 35'' and a height of 2887 m. There on the top we meet Braulio Pulla ("pintor") of the Parroquia de Tárqui. He tells us that they want to improve the acces to this start of the French-Spanish geodesic expedition. 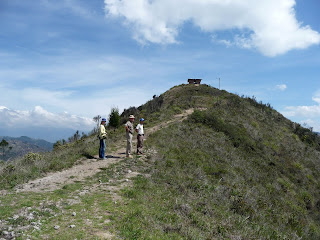 Almost on the top of the Francesurcu, which La Condamine used
for his triangulations.
Eleven km south of Tárqui (11h40) we come to a 1829-war monument where Grand-Colombia fought against Peru. From there we have a beautiful view over the valley of the Rio Jubanes.
Going down the landscape changes continuously: At 2000 me everything is green; at 1500-1200 m we drive through a red desert without any plants; below 1000 m everything is green again, In the villages they sell bananas (platanas or maduros) and roast pigs on the street side whiloe children try to throw water in our car. 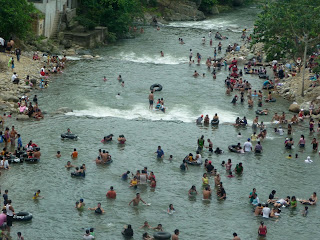 Enjoying carnival - on the way down to Santa Rosa.
We continue to Santa Rosa and Puerto Jeli near the Pacific coast where we eat fish in a big crowd feasting carnival. Finally, at 4 o'clock we leave for Zaruma where we arrive an hour later. Position: S 3° 41' 34''; W 79° 36' 37'' and 1220 m high. La Condamine was not allowed to put the position on the map because of the gold mines that are still existing!
Too late we leave for Loja. We have to climb a dirt road over a mountain through dense mist and in the dark. But when we come to the valley of Catamayo everything is different again: it is dry, warm and there is a bright skye. In the beautiful Hotel La Lojana, we didn't catch enough satellites to measure the position or we were just too tired....
15/2. Monday. At 9:30 Eduardo comes and fetches us for a trip in the direction of Zamora in beautiful wheather. We stop on the ridge of El Tiro mountain (Parque Nacional Podocarpus), where we walk up and see the transition between the wet and the dry Paramo, just as Antoine Cleef had explained to us. We saw many beautiful plants and flowers, a strange, large bird (long neck, white beak(?) and a long falcon-like tail) sailing above the mountain and we measure our position: S 3° 59' 40''; W 79° 8' 50'' and 2927 m high. 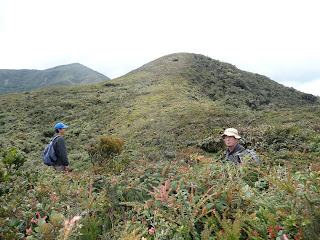 The Paramo vegetation of El Tiro; different from that of the Cotopaxi.
We continue our drive to the San Francisco Scientific Research station (Estacion Cientifica San Francisco), wher we are kindly received by Jürg Zeilinger with a nourishing soup. The total Institute comprises some 200 people, most of them German (they call themselves Humboldt's successors!). Many Ecuadorian students can follow here a master study and even do their PhD! Jürg showed us around and we went down to the river. He told us how important the natural landslides are (see picture). These superficial landslides, occuring at random and probably because the growing trees became too heavy for the thin organic layer lying on the steep slopes of slippery "schiffer" (weak-metamorph), necessitate the forest to adapt and give new opportunities to other plants and trees during reforestation  (there are about 600 tree species). Because of this continuous "mixing" and adaptation the forests show their high biodiversity. And humans contribute to it although the (anthropogenic) landslides they cause (by making roads and pastures) are wider and deeper, inducing a different kind of reforestation. 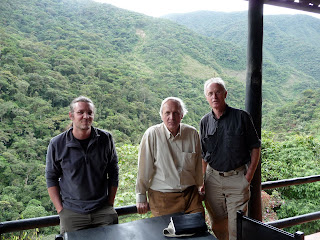 Left Jürg Zeilinger in the Esyacion San Francisco.
In the background two natural landslides.
After having returned to Loja we fetched Carlos Iuan Espinosa, a botanist of the Universidad tecnica Particular de Loja, who hopes to defend his thesis this year in Madrid. He specializes in the "Cascarilla" tree, Cinchona condamine, the tree La Condamine describes as having found in Cajanuma and as being the richest in quinina-content. Humboldt gave the tree this name because he had found another species in Colombia which he called Cinchona officinalis. However this has become the official name of the tree in Loja. 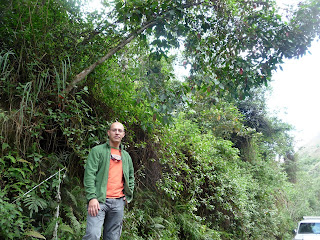 Carlos Espinosa standing under a young Cascarilla-tree at the site (Cajanuma)
where La Condamine describes that the best trees could be found there.
In the evening Eduardo and Anna showed us a deserted Loja: almost everybody had left town for the warmer Zamora or Vilcabamba towns to celebrate Carnival. But we found a pizzaria, where we had a nice dinner with their sons Abram (12y) and Paul (7y).