From Zumba to Jaen to Imacita

From Zumba to Jaen
17/2. Wednesday. In rainy weather Eduardo drives us out of Zumba. The road out is difficult to find: "Un preguntita, amigo, donde es ..". The Ecuadorians often use diminutives (like in dutch: "een vraagje en groetjes"). After 1.5 h we reach the bridge over the Rio Canches, the border. It takes more than an hour at the emigration office. I hear my first "Grietjebie", the flycatcher, so common in Surinam! 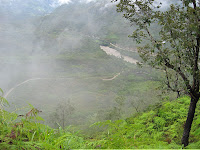 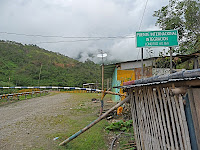 Coming down to the border Rio Canches.  Border between Ecuador and Peru: La Balsa.
Around 2 p.m. we have reached San Ignatio, where we have lunch. The GPS gives position: S 5° 8' 46'' and W 79° 0' 18'' and an altitude of 1295 m.
We drive on an average height of some 1000 m. Everywhere on the mountain tops we can see "huertas", small gardens, and houses. Why cultivating on these steep slopes? Is it a heritage from the Inca's? 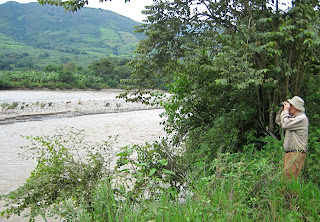 The Rio Chinchipe; according to La Condamine "plus large que la Seine a Paris".
And then, after 2 more hours through the mountains, we see a broad Rio Chinchipe, used by La Condamine. When looking months ago with Google Earth at this region I wondered how we would ever get through these mountains. But Eduardo drove us over the small road that once has to become "Eje Vial #4", connecting the Pacific coast to the Amazon. After 3 p.m. we reached Parico where the road became paved: what an incredible luxury! There also, we passed the third security post, "excombatientes" of the Cenepa-war against Ecuador(1995). They gave an uneasy feeling, just as described by Carlos Correa in his "Bitacora". Let us hope that they frighten the robbers more than us. Eduardo gave them ~5 Soles for their service. At 6 p.m. we find a good Hotel in Jaen. 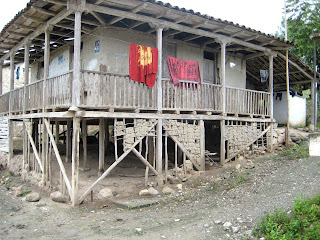 In Peru, more than in the south of Ecuador, the villages looked
poor and many houses were buil with adobe blocks.
From Jaen to Imacita
18/2. Thursday. Jaen is a busy city full with "tricimotos" or "mototaxis", the typical Peruan tricycles that seem to transport people very efficiently over the most difficult and muddy roads.
When I paid the hotel bill to the lovely secretary, Mileybi, she had the disturbing news that there was no real road to Nieva. While Frans took her to the central plaza to shoot a "Peruan welcome interview", I asked another nice lady, the owner of the hotel, about getting to Santa Maria de nieva. She said that there was certainly a road and pointed to one of the guesta who knew the region. He gave useful information to Eduardo, while Hilbert and I met another guest, Elsa Aldaz, who had a brother Ramón living in Nieva. She wrote a letter asking him to help us. Many pictures were taken and there was a cordial farewell. One hour later than planned we left the hotel with a warm feeling for these helpful people and with more confidence in the road ahead. 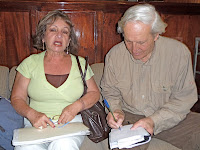 Left Elsa Aldaz, giving useful information about Nieva where her brother lives. He would help us later with finding a "hostel" in Nieva. Right: Frans Mileybi and Hilbert at the Hotel desk in Jaen.
When we left Jaen we saw a group of young bicyclist escorting a couple (European?) on fancy bikes carrying camping equipment. These were the first (and last?) tourists we saw. We wished them "buon viaje" from our comfortable car.
It was a short drive to Bague Grande, still over a paved road. We passed a large bridge over the ..... Marañon river! This could have been the bridge where local indigenes fought last year with the Peruan police, resulting in some 80 mortalities. We pass again a post of the "Seguridad". 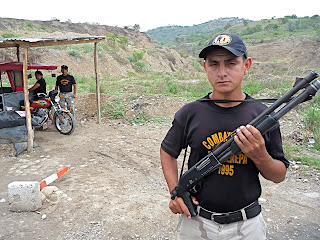 We passed several control posts of "excombatientes" of the Cenepa-war against Peru.
According to Hilbert, who was in the army, the bullets of such a rifle penetrate easily a car!
At the tourist office the people were again very helpful and interested in our trip, but they did not know much about the Nieva region. They gave us a useful map for the first part of this day's journey. At a gas station we tanked extra gasolina; they washed the car and appeared to highly appreciate the little compasses on a keychain we gave them. They tell us that it is a 12 hour drive to Nieva! It is already 12:30, so we won't reach Nieva today.
Following the brown Marañon river on the east side north we drove through a green landscape of rice and cornfields. But soon the land became rough, dry and rocky. At 1:30 p.m. we reached the beautiful Pongo de Rentema, mentioned by La Condamine, who probably travelled on the west side with great difficulties having several accidents, and crossing many times the Rio Chuchunga (Tsuntsuntsa?). Then, half an hour later, everything is green again. We pass very poor villages in between beautiful bambu bushes, resembling Java..... 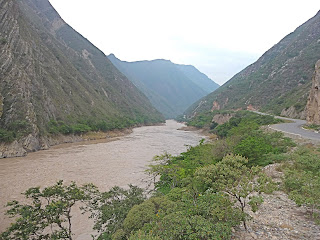 The Pongo de Rentema shortly after the confluence of the Rio Chinchipe, the Rio Marañon and the Rio Utcubamba;
the latter is called Rio Chachapoyas by La Condamine.
At 3 o'clock we come to a road bloch at pueblo Montenegro: we have to wait until 6 p.m. because of road constructions. We walk down to the border of the Marañon, where Eduardo inteviews us for the camera of Frans. Here I become bitten by sand fleas which I have to regret within hours...Some young indigenes watch us and Eduardo interviews them too. They seem very happy with our compasses. Position Montenegro: S 5° 18' 12'' , W 78° 25' 44'' and altitude 344 m. 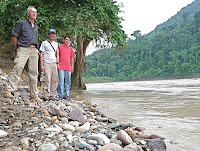 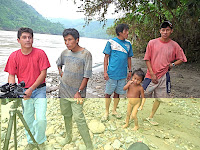 Left:  Here at Montenegro, where we had to wait during 3 hours, we descend for the first time to the Marañon river.
Right: Indian boys that had worked here wait for a boat to bring them to their village downstream. Later, Eduardo would interview them also.
After the blockade is lifted a long line of cars races over the unpaved road as if in a ralley. But soon we are passed by the white Toyota's with their narrow tires: they seem to fly over all the wholes and muddy ditches. 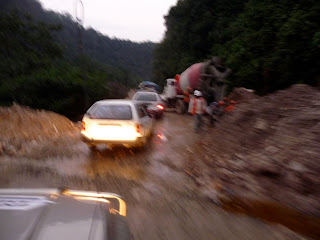 After the blckade was lifted at Montenegro we raced over the road under construction. Everywhere people were still working. The Jeep Montero 4x4 of Eduardo was no match for the Toyota's. the following day at Nieva we would learn why!
After crossing the Chiriaco river it was already dark when a man asks us to drag his broken car: "only 20 min to the next village, Nazareth", the place where La Condamine embarked on the Marañon. It took poor Eduardo more than an hour to deliver the car in the pouring rain. The 20 min applied to a Toyota in full swing, he explained later. Nazareth appeared to be a "Communidad" of the Awajun indians. The houses with typical roofs of palmtrees occur dispersed over a large area. In a tropical rainstorm we finally found hotel Cyndia in muddy Imacita. 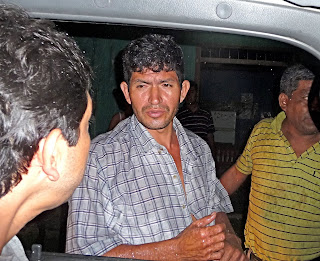 Eduardo asks: "Amigo, are we in Nazareth?" 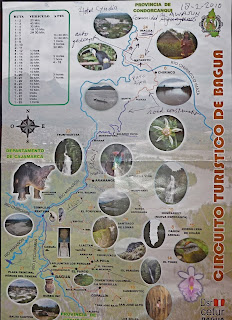 La Condasmine had good reasons for correcting the many mistakes in the map of Samuel Frits. We use three modern maps and the above tourist map obtained in Bagus Grande. It is remarkable how the maps can differ in names and locations! It makes it very difficult to reconstruct the route taken by La Condamine.