Labels: Awajún, Belém, Greenpeace
So…., we made our “voyage” from Quito (aarival 6/2) to Paramaribo (departure 25/3). It was not a touristic route La Condamine and Maldonado had taken.  But they took us to interesting places and unexpected experiences. In their time, 257 years ago, the Jesuits played an important role in furnishing them information, transport and comfort in the mission posts. Now, we could meet fellow travelers, could hire guides or take a plane.
Also, when preparaing the journey, we could make use of Google Earth. But did that really help us? I remember how I couldn’t find any road between Bagua and Santa Maria de Nieva, because the program didn’t have “imagery at the necessary zoom level” for that region; at the lower zoom levels it only showed frightening landscapes of seemingly unpenetrable woods and mountains. The maps we had were different or wrong in many places.
But now we know: there áre roads and villages and everywhere houses where people make a living. And not all maps are wrong: A friend, following this blog, could find the Pongo de Manseriche and the place from where the river was navigable on a map in our school atlas (“Schoolatlas der Gehele Aarde”, Bos-Niermeyer) of 1951! A real good map is the “Carta Hidrografica”, but we only obtained it when we were already in Iquitos! 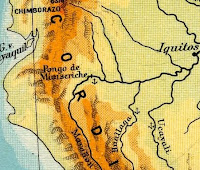 In the center of this picture from the dutch “Bos-Atlas” the Pongo de Manseriche is indicated. The anchor signifies that the Amazon is navigable from here on; we now know that this place is called Sarameriza. 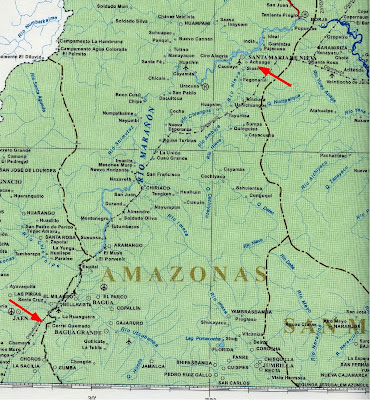 Part of a very good map! The Carta Hidrografica – Región Amazónica del Perú (escala 1 : 1000000) was obtained by Hilbert in Iquitos. On this map we find no roads, but villages like Corral Quemado (see arrow and below) and names I had written down, like El Muyo, Montenegro, Cusu Grande and Siasme are indicated. Juan Velasquez on the Rio Nieva opposite to Santa Maria de Nieva, is not specified; or is it the same as Achuaga? We also see the course of the “Oleoducto”, which our road seemed to follow.
Apart from seeing La Condamine’s apartment in the Colegio Maximo, climbing the Francesurcu mountain, finding the bronze ruler or visiting the many places he mentions in his book (eg. the Pongo de Manseriche, Borja, Santarem, Belém, Cayenne), the greatest experience was meeting the many different people traveling with us. La Condamine had learned spanish and indian languages in Quito, but did he speak portuguese? We had only learned spanish, but should also have learned at least some portuguese….
Looking back at the pictures one can be impressed by the many things we saw. But there were só many things we missed. Why didn’t I speak with the men in the little pub at the end of the muddy path going out of Nieva? Was I afraid because they were shouting and laughing at us? Yes!; and now I still do not know how it is to talk spanish with some drunk guys. And why didn’t I ask more questions to Washurú in Sarameriza? Because the music was so loud that I couldn’t hear him anyway? Now I still do not know what his involvement was during the uprising of the Awajún indigenas on 10 May 2009 or during the massacre on 7 June 2009. When we crossed the Corral Quemado bridge on our way from Jaen to Bagua (insert), I didn’t think anymore of the terrible video movies I had seen before our journey on Youtube:  http://www.youtube.com/watch?v=9pXLvlXZR6I . The BBC reported that some 10-50 indigenas and 24 police officers were killed: http://news.bbc.co.uk/2/hi/americas/8093729.stm
And in Manaus, why didn’t we go for the terra preta site that had been pointed out to us by Marc van Roosmalen? Because La Condamine didn’t know about terra preta? Was this way of performing agriculture still applied in 1743? 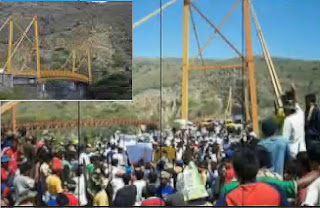 Uprising of Awajún indigenas on the Corral Quemado bridge (10 May 2009). Is it the same bridge that we crossed (insert)?
In Belém, on the other hand, we díd go to places where, I think, we had nothing to do. On Monday (8/3) we were looking for the Archivo Publico in the Vila Campos Sales, in the old quarter “Comércio”. The building was closed so we walked down the narrow street, a poor, crowded market where they were selling clothes, food, mobile phones in endless rows of market tents. People were still sleeping on the street, some were washing themselves with the water from a leaking water pipe; “toilets” were in the side streets. Men were carrying heavy loads, women were talking, laughing, hardly looking at us, walking purses stuffed with money they were lacking. What else could they do than ignore or rob us? They let us pass, seemingly uninterested, as if asking “are you coming to look how poor we are?”. That is how I felt: we had nothing to do there, with all the money of the Evangelical world we could not have helped them and they could not have been interested in La Condamine, our excuse for coming there. If you are a tourist limit yourself to tourist places!
Back in Holland I had to get used again to the clichés of “biodiversity”  (that is the páramo on El Tiro mountain; see blog 17 February 2010) or “green current” (what is that?) and the “Xingu dam” (200 km south of the Amazon river), that would flood and destroy 500 square kilometers of “intact Amazon rainforest”, like that over which we had been flying (we flew over its mouth between Santarem and Belém). My first reaction was: “why don’t we mind our own business?”  Does Greenpeace really think that, after having deforestated Europe, we know a better way for developing a country like Brazil?