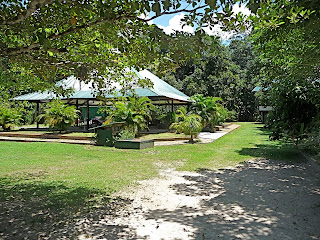 Entrance Camp David with the big lounge.
14/3. Sunday. Waking up at 5 p.m. I thought it was already becoming light. A rooster was crowing nearby, but no other birds could be heard. Only, infrequently, the strange noise of a bat and the continuous sounds of crickets. I went down to  my hammock under the big roof of the lounge. At 6 a.m.the stars started to disappear and it finally became lighter. Now I heard a loud, melodious sound "ou-yee-you"; probably frogs. Only around 6:20 the first birds started to sing: the "Daguka", the "Gadofowru" (bird-of-God), the "Blauwtjes" and, finally everywhere, the Great Kiskadee or "Grietjebie", which we already saw at the Ecuador-Peru border. It will take some time again before I know the most common ones. It was near 7 a.m. and fully light when the mosquitos chased me out of my hammock. 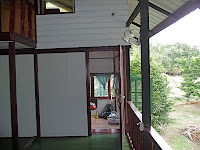 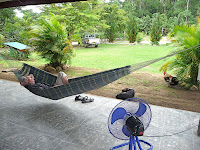 Left: Our bedroom with a "guard" above the door. Right: Hilbert relaxing in a hammock with dog and rooster.
Camp David is a forest camp, not a luxurious resort! That means that you should accept reaching it via a very bumpy road, having a large spider above your door, a frog jumping in front of you in the dark when walking over the grass, a small lizard under your bed or the sounds of bats outside the screens of the windows. The shower gives one type of clean well-water and is warmer in the evening than in the morning. When it is dark (7:30 p.m.) the electricity is switched on, allowing you to recharge your batteries and to fall asleep on a bed or in a hammock in the cool breeze of a van. You can call this semi-luxurious. 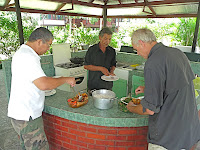 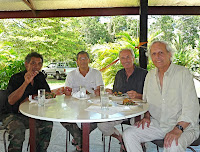 Dole has prepared a traditional meal with rice, vegetables and fried fish. 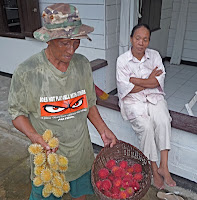 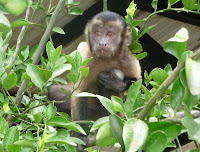 Left: It is Rambutan-time! A neighbour of Javanese descent gives us two kinds of Rambutan. Right: The monkey Kobus living half-wild down the road likes the rambutan.
In the morning Dole makes coffee or tea and for breakfast warm little breds with fried eggs. Then, there is time for reading, for looking around at the "Redikins"  (Silver-beaked Tanager) and "Doifi's", for making a walk to the surrounding developments or for asking Dennis to tell about the complicated and dramatic events in the eighties with the military coups of Rambocus, then Bouterse and, finally, the civil war with the "Bosland Creoles" (van Brunswijk), all happening within a community of some 450.000 people of very different origins, brought together by the Dutch. 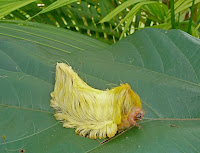 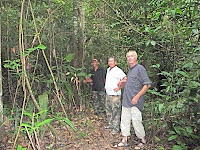 Left: In what butterfly will this large (10 cm), hairy beast transform itself? Right: On a walk behind Camp David. 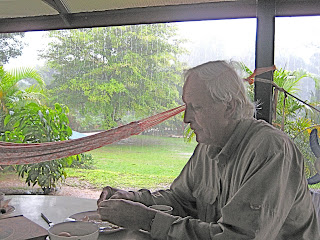 Eating peanuts during a rain shower. The only tasteful thing La Condamine could enjoy on his voyage seemed to be "cacahouètes".