Paramaribo and visit to the Upper Suriname river 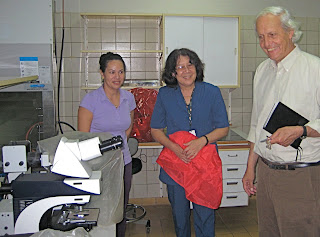 The new Leica fluorescence microscope acquired by the MWI to be used for detection of chromosomal aberrations.
17, 18 and 19/3. Wednesday, Thursday and Friday.  One of our visits had been to the "Medisch Wetenschappelijk Instituut", a medical institute connected to the "Anton de Kom" University. There we visited Audrey Lo-Fo-Sang and Joan Werners with whom I had corresponded about bringing a fluorescence microscope sponsored by Fraen-Company (Milan) to Paramaribo, just as the one we brought to Salatiga in Indonesia. This time, however, contacts with Fraen were postponed and will have to be restored again. We also met Prof. Mrs. Adin, who explained to us a real-time PCR machine used for detection of influenza, malaria and Chlamidia; not an easy thing to explain...... 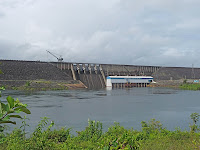 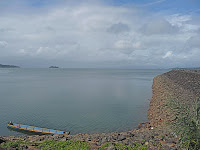 The Afobaka dam and (right) the Brokopondo drainage basin (stuwmeer), with to the west the Brownsberg mountains in the far distance.
On Thursday we left Camp David at 8 a.m. arriving at the Afrobaka dam around 11 o'clock. Although the water level was low it is still an impressive drainage basin. Driving west of the lake through the Brownsberg mountains we saw the so-called "transmigratie"-villages built for the people who originally lived in the Brokopondo area. These people were "Bosland Creolen", mostly Saramakans, descendants of fugitive slaves. The villages are characterized by the so-called "kostgrondjes", gardens from where vegetables and fruits are obtained. They are always accompanied by newly-burned areas where new gardens will be started. This habbit of slash-and-burn causes much concern among "green" people in Europe. Driving now through this region of secondary forests the burned areas do not make me too depressed: it is not a nice sight, but it occurs on a small scale and re-forestation seems to occur rapidly. 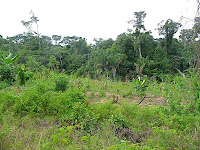 Left: A typical village garden ("kostgrondje") where casave (tapioca), "mais" and bananas are cultivated.
Right: a recently burned area where a new garden will be started.
The dirt road to Isadou was still bad, but a Chinese company is working hard to make a pavement. Strange to see the Chinese characters on all their equipment and trucks. In Pokigron we took a koreaal to Isadoe (meaning "Welcome" in the Saramakan language) on the Upper Suriname river.  There we slept in a little house drawn by Hilbert. 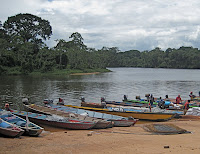 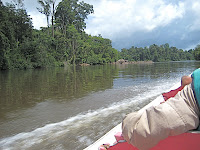 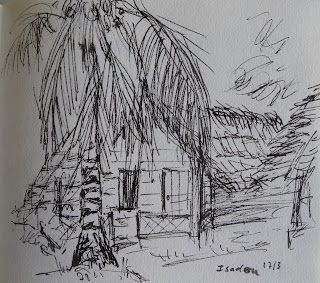 .
Hilbert's impression of our house in Isadou.
Before making a walk through the jungle André, the owner of Isadoe, had to remove a "Sika" (a rapidly growing bag of eggs laid by a sand flea just beneath the skin) from underneath my foot. Then, we went by boat ("koreaal") over the river chasing away many kingfishers. Later, walking over a path through the jungle of a secondary forest, we saw three little monkeys ("Sagowijntjes") high up in the trees. It was difficult to follow them and they had soon disappeared.... How diificult it must be to make a study of the behavior of these monkeys like performed by Marc van Roosmalen (see his book "Blootsvoets door de Amazone")! 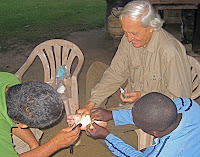 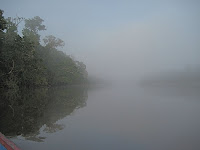 Left: In the early morning André removes a "sika" from underneathe my foot using a needle from a palm tree.
Right: Fog over the river. 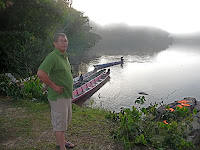 Dennis accompanying us to the koreaal and a large Ringed Kingfisher or "Fisman". 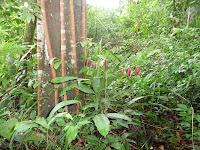 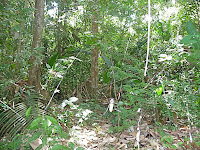 When am I going to learn all these plants and trees and the stories about their healing or "Winti" powers?
Our guide, Dorus Amimba, showed us many medicinal plants and told us the stories about their healing power. For instance, "Neku", a liana used to intoxicate fish. Later, in a village, we saw how little boys were pounding the leaves of this liana with a large wooden pestle. When walking through Gunsi we met his uncle, Done Adriaan, who had worked as surveyor in the large Canadian gold mine near Brownsberg and who was now the "Kapitein" of the village. 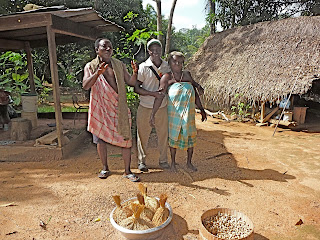 The Uncle and an aunt of Dorus, our guide with whom we walked through Gunsi, a Saramakan village.
The "Bosland creolen", descendants of fugitive slaves, consist of various tribes like the Saramakans, the Matuaries or Kwintis, the Aucaners (to which Ronnie Brunswijk belongs) and the Paramakaners. In general, these people live much closer "to nature" than the original amerindians. The indians in Suriname (Caraïbs, Arowaks, Trios and Wajanas) seem to take over western habits much easier; they seem more adapted to western culture except when they go hunting! Bosland creoles are more farmers than hunters. (Information from Dennis Chin-a-Foeng).
Dorus was roman catholic. He called the religion in Gunsi "heiden" (pagan), but agreed that it should be called "Winti". The little houses in Gunsi had small doors, believed to make it difficult for bad ghosts to enter. When I asked Dorus about his deformed fingertips (lepra?), he said that it had been caused by bad ghosts when he was still a little kid. It had finally been healed by a Dresiman (shaman). He also explained that this non-christian village was protected against bad ghosts by low gates, called "asanpau", at the entrances; again bad ghosts cannot pass such low entrances. 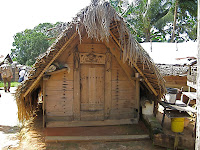 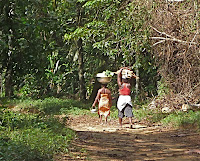 Left: A typical house in the non-christian village Gunsi, with a low door that prevents bad ghosts from entering the house.
Right: Two women coming from their garden ("kostgrondje"), one transporting vegetables, the other wood. 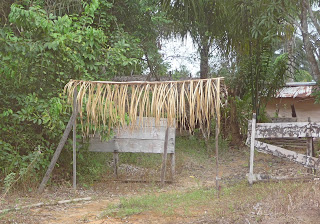 A protecting gateway ("asanpau" in Saramakan) at the entrance of the village.