Music Festival at UKSW. On October 31 we went to the UKSW-Music Festival, and enjoyed the choirs singing for the category “Etnik”. The crowd of students from all over Indonesia was as enthousiastic as soccer-supporters in the Netherlands. And we agreed with them, that is with the students.

Choirs from Papua and Ambon in traditional dresses. 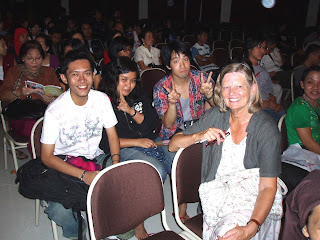 Lidie attracts a lot of attention…. The students behind us wanted to know from where we came? From “Blanda”. They were from Jakarta, Salatiga and Japan.
Alvin. The 8-year old son of Lusi and Santoso already knows about Antoni van Leeuwenhoek and Louis Pasteur! He already spoke better english than most students. Also, he had learned how to calculate with a chineese Abacus. 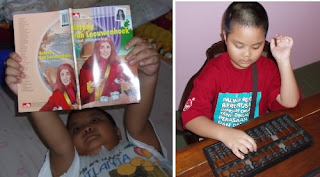 Nature. This time I have seen more birds than 8 years ago. At the lake of Rawah Penin we saw the Kingfisher and a White Egret. Near the lab I finally saw the Oriole singing in the trees and a yellow Honeysucker (?) in a Flamboyant tree. High in the sky a large eagle, the Garuda? The Gekko sounded 12 times. ..
Many different birds could be heard in the top of bamboo trees, but they remained invisible. 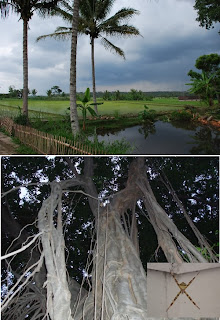 Rain clouds above the sawa (Photo Ed Aschermann).
Below the Beringin (Waringin) tree (inset: a large spider, almost 10 cm across). 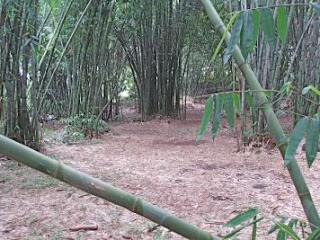 A wood with bushes of bambu trees. Many birds, no snakes,
but an old woman cutting bambu twigs who got a shock when she saw me….