Tahu factory. On our way back from Telomayo mountain (1 November ’08) we stopped at a tahu home factory. In contrast to tempe, tahu (chineese: tofu) is a non-fermented soya product made by coagulating the “milk” of ground and filtered soybeans. In this factory the coagulation was obtained by adding one-day old washing water. Microscopic examination of this water showed a high concentration of bacteria (probably Lactobacillus); the pH was 4.3, apparently low enough for coagulation. A cheese-like remainder of the filtrate is used for animal food. At the end of the day the pressed tahu blocs are cut and fried and sold the next day. 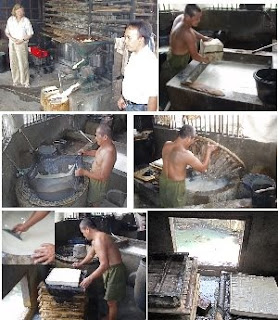 A tahu home factory. Insert left: the coagulation step after adding the acid washing liquid of yesterday. Below right: a fresh tahu bloc that still has to be cut and fried.
Research. Fenny, a student of the faculty, and Yanti, a technician, were of great help in making preparations. Fenny was especially good in scaling and archiving the pictures with the HP-computer. They made preparations of outgrowing spores of the mould Rhizopus oligosporus in starter cultures for the soybean fermentation. And Lusi photographed the preparations in which the DNA was stained with a specific fluorochrome (DAPI). The photograph is from the report which still has to be finished. 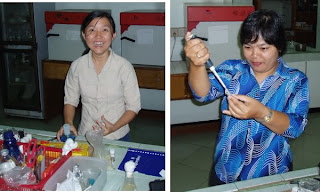 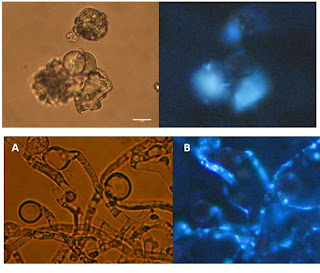 Samples of tempe and starter cultures. Left: fresh packages of tempe after one-day fermentation. Right: the tempe became “busuk” or rotten after about a week.

Arum & Atik. When we were having lunch in a small restaurant in Kopeng on Telomayo mountain, two curious girls asked Lidie where we came from. They worked in a 4-star resort in Salatiga called Laras Asri. We went to visit them two days later. They proudly showed us around: a beautiful lounge, luxurious suites, a (for me) frightening “spa”, swimming pools and bars, all surrounded by a high wall that hided the kampong behind it. How we felt lucky to stay in Le Beringin Hotel, from where we could directly walk-up to the street to fetch saté and buy fruits on the market.
Arum and Atik lived together in one room. Arum is catholic and prayes once a day; Atik is moslim and prayes 5 times. Arum was glad she didn’t have to do that, but accepted the habit of her friend. They both thought that God had made man from clay, but also "believed" in evolution….
(Salatiga is exceptional in that 60% of the population is christian and and 40% moslim. In the whole of Indonesia more than 80% is moslim.) 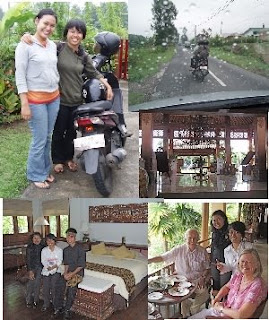 Arum and Atik, on their motor bike in the rain and in the resort Laras Asri.
The lounge, beautiful suites and lunch on the terrace with nasi goreng and soto and a discussion about evolution..