In Salatiga there are about 100 home factories for tempe production. Tempe is a food product obtained by fermenting crushed soybeans with the mycelial fungus Rhizopus oligosporus. Even in small home factories the starter cultures of the fungus (called “ragi”) are bought from factories in Bandung or Jakarta. The soybeans are bought by the governement in the US and distributed via special shops. They are cheaper than those from China or those grown locally. However, during the last months the price of soyabeans has more than doubled.
An article in the Jakarta Post perhaps points to renewed interest in the use of tempe. 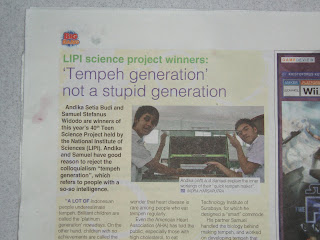 Jakarta Post: young scientists present their finding that tempe fermentation
can be accelerated by increasing the temperature in an oven.

During the past days we visited home factories of different sizes. They use different starter cultures and apply different recepees. We took samples of the various stages in the production for microscopic characterization of the microorganisms. See more recent posts. 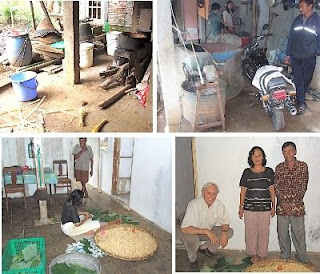 Example of a small factory. Clockwise: -Fire place where the crushed soybeans are steamed (not boiled). -Water well and small machine to crush the beans. -The fermented tempe is packed in banana leaves. -Together with the proud owners of this home factory. 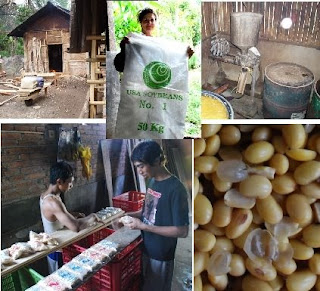 Example of a larger factory where 7 people are working. Clockwise: -Backside of the factory where the soaked soybeans are boiled in big drums. -Jeffy holding one of the US-sacks. –The crushing machine. –Packing of the washed soybeans mixed with “ragi” (starter culkture). -Naked soybeans and their hulls.

One small home factory was run since 1959 by Bapak Muslimin (75 years; Address: Sawo, Rt03RW01, Salatiga). When I asked whether he could make a living with the produced tempe he had to laugh. He told us happily that he payed the university study of two sons and that he was well able to support the rest of the family. His smile is no exception: Although we have seen many poor people in Semarang and in Salatiga my overall impression is that there is little discontent among the people. 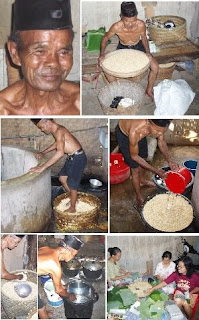 Another example of a small home factory owned by 75 year old Bapak Muslimin. He has no machine to remove the soybean hulls and uses his bare feet. The hulls are not removed.