6/2. In the airplane we didn’t speak spanish yet. But I met a french couple (physicians, amateur bird-watchers and experienced travellers) who knew about La Condamine. Telling them about our journey, they asked how frequently such a tour was organized….. They had experience with mosquitos and gave some good advices about “votre seule ennemie”.
When we flew back from rainy Guayaquil to Quito, the wheather cleared but the clouds remained: we couldn’t see the high volcanos. At the airport we were welcomed by our host Sebastian. He saved me by walking véry slowly and offering us a good cup of colombian coffee.
Downtown Quito reminded us of Bogotá, with its big malls, the taxi's and huge buildings. 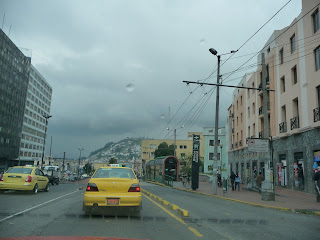 Driving out of Quito reminded me of Jerusalem, also built on mountains with in between large roads full of traffic. It took Sebastian quite some time to get out of the town in the pouring rain.
The road south went slowly up, until there were no large trees anymore. The agricultural landscape now reminded me of the Golan Hights where we drove a month ago (see blog of December 2009). But here, we saw our first lama! It took some time before Sebastian accepted our pronunciation: "dzjama".
Finally the road went down again and we reached Lasso and at the end of a side road there it was: La Ciénega. How impressive! It stimulated Hilbert to draw. 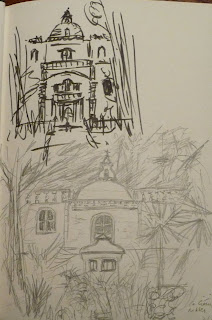 Entrance and rear view of La Cienega
In every aspect this Hosteria reflected the atmosphere of "Tempo doeloe". We dined like kings, with Chilenian wine and with a servant standing at our table ready to help or answer questions. 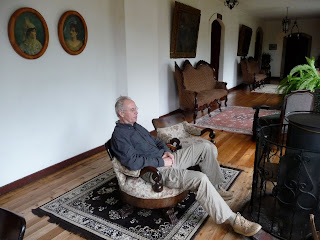 Tempoe doeloe at one of the many fire places in the Hosteria
7/2. Exactly at 8 o'clock the guide Alex Cadena (born in Latacunga) came to fetch us in his 4-wheel drive for a trip to the Cotopaxi (5987 m and still active). The vulcano was hidden by heavy clouds and at the desk they wished us good luck...But we were véry lucky and while driving around this magnificent mountain we saw the top for more than an hour! For the first time now we walked over the Páramo, the vegetation Antoine Cleef had told us about. 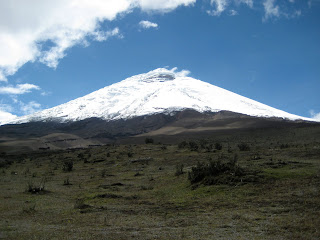 The cloudless top of the Cotopaxi 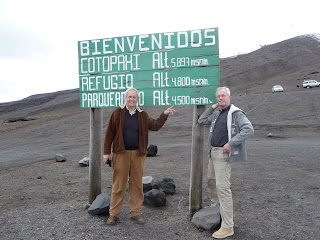 The car brought us to 4500 m. It would take us at least an hour to walk to the refuge, 300 m higher up. Luckily (?) we were wise enough not accept the invitation. 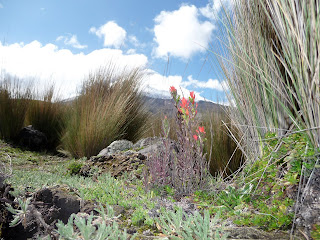 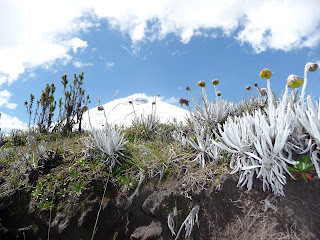 Hopefully my colleagues at UvA will be able to give some names....
Just outside the entrance of La Ciénega was a stone comemorating the visit of La Condamine to this magnificent place, now 300 years old. At that time there must still have been a "ciénega" or swamp which was dried by the now huge eucalyptus trees on either side of  the entrance road. 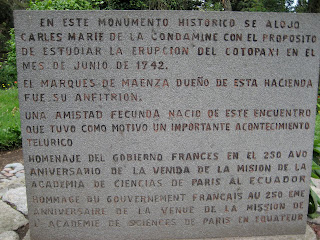