10/2. This morning Sebastián had come by bus; so, we walked to thé bookshop of Quito: Libri Mundi to look for a bird guide, which they didn't have. We took a taxi to the historic center of Quito, the Plaza Grande o de la Independencia, where Daniel, the friend of Sebastián joined us. Nearby we visited the Church of the Society of Jesus (Iglesia de la Compañía de Jesus, an impressive baroque building built by Jesuits. Once inside, a young guide started to explain us its design of naves, transepts, crossings etc. But I was more interested in where the Jesuit College was, about which I had been reading in Neil Safier's book. Somewhere there La Condamine had placed a bronze rule with inscription on one of the walls (see p. 42 in "Measuring the New World", 2008). 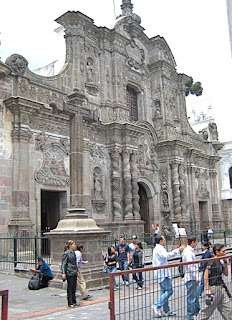 The beutiful building (all gold inside) of La Compañia de Jesús
Our guide was not offended and brought us past the gold-leaf adorned chapels to a kind of office, where we met - Oh, ¡qué suerte! - Juan Carlos Pinas, a museologist who's hobby was....La Condamine! He knew all about the subject, but was nevertheless pleasantly surprised when I showed him the book of Neil Safier. So, he showed us around in "el salon de Grados de la Universidad San Gregorio Magno de los Jesuitas", once a chapel, now a beautiful exposition hall with many old maps and instruments of the time of La Condamine and later: a microscope, compass, telescope, octant, barometer, but not......a pendulum. For both the bronze ruler (which La Condamine had originally placed on one of the walls of the Collegio Maximo) and for pendulums we had to visit the Observatório Astronómico in the Alameda parc. 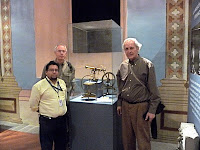 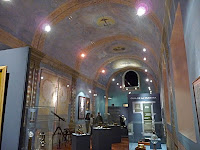 Left: The museologist Juan Carlos Pinas of the Unidad de Conservacion, Fundación Iglesia de la Compania.
Right: the beautiful exposition hall, once the Salon de Grados de la Universidad San Gregorio Magno de los Jesuitas.
After having seen this beautiful exposition, which also impressed Sebastián and Daniel, Juan Carlos Pinas brought us to his office in the Colegio Maxima de Quito, past the rooms where La Condamine had resided (incognito) for many years. 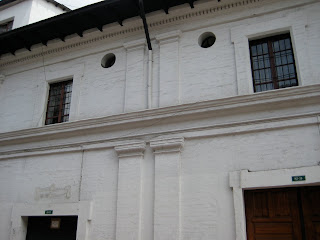 Behind those windows La Condamine found hospitality of the Jesuits for many years.
In his office Juan Carlos showed us a beautiful book with information on La Condamine's stay in the Jesuit College. One of the things I briefly read in the book (which I bought; I sent it by post to Holland) was the acknowledgement that the presence of La Condamine had greatly stimulated the scientific activities of some of the Jesuits there. An interesting story, told by Juan Carlos was that one of the members of the expedition, the technician and mapmaker de Morainville, had made paintings (see below) which were sold in order to get some money. Apparently the expedition members run out of money several times during the 7 years of their stay. 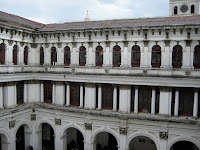 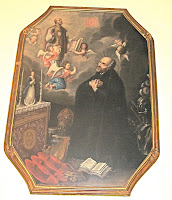 Left: When the upper floor was built in the 19th century, the bronze rule of La Condamine was displaced, but not lost.
Right: One of the paintings of Monsieur de Morainville.
On the roof of the Colegio, Juan Carlos pointed out where the meridian went through which the expedition had measured. Satisfied, we left the Colegio and went to the nearby plaza, Palacio del Gobierno for a good lunch. 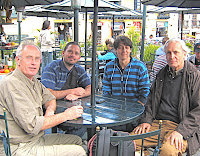 Left: From the roof of the Colegio the Iglesia Sicalpa(?), one of the points of the measured meridian.
Right: Lunch with Hilbert, Daniel, Sebastián and Conrad.
After lunch we walked to the Parque Alameda, where we took pictures of the principal expedition members and visited the Observatório. Here again there were many interesting old tools exhibited. We saw several ingeneous pendulums, but all seemed to be of a later date. An official told us that the pendulum used by La Condamine to measure the gravity had been lost. But at least we saw the bronze rule (varilla metalica) of the length of the pendulum on a marmor stone with inscription on observations on the pendulum's motion.. It doesn't seem to be the same rule as shown in the book of Neil Safier (p. 42), but the inscription described in his book must be the same. I hope my friend Henrie W. will, once again, help me to translate the latin text. 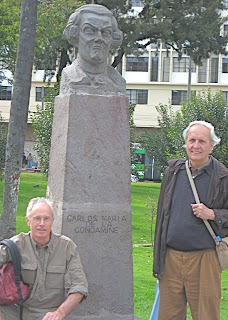 After heaving read for years about the statue of La Condamine in the Alameda parc,
we are finally there! 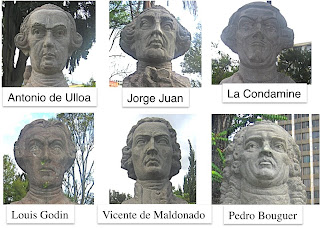 Statues of various expedition members. La Condamine is not represented very intelligently.
Would the artist have known that La Condamine was not popular among the Quitoenians? 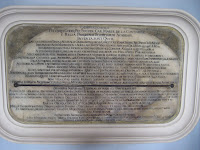 Left: a 19th century pendulum in the Observatório Astronómico.
Right: the bronze rule giving the length of the pendulum used by La Condamine.
It is probably the precursor of the standard meter in Paris.