Camino de Orellana and the valley of Yaruqui

9/2. The taxi driver looked at the address and promised us that he would "bring us down". And down we went from our hotel in Quito's center to Guápulo, down an old bumpy road named the Camino de Orellana. This was the very road Orellana took when he went on his expedetion in 1581 to the Rio Napo and then down the Amazon. 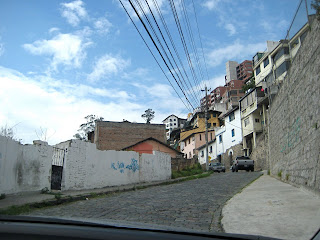 The Camino de Orellana
The taxi stopped in front of the old church of Guápulo and with a lot of excuses the driver explained that we had to walk back up the road, a good exercise in breathing. But there we were cordially welcomed by a tall, slender figure, the friend of Norbert Vischer, the first couselor of the German Embassy, Raymond Dequin, who had invited us for breakfast at 7:30 h. "Dequin" is not a french name but a Prussian word for dike. Although we first entered a huge but empty room, it soon became clear why he had asked us to come there. The house on a steep slope, was surrounded by balconies overlooking the valley of Cumbaya, where we had been yesterday. Raymond showed us around in this beautiful villa and in his fantastic garden with the highest palmtree of Quito (a "wax palm") and many other interesting trees like the Quito-palm and the "tomato-tree" (see below). 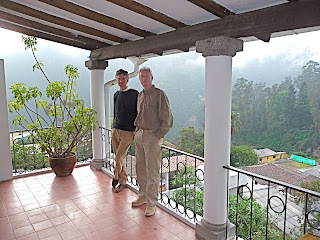 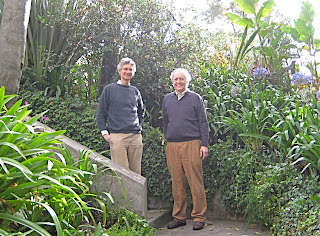 The beautiful house and garden of Raymond Dequin
Raymond agreed that the way Quito was built on many hills resembled Jerusalem. It appeared that he knew a lot about Israel, the Arabic world, where he had lived in his youth and about the Islam. So, while enjoying the delicious yoghourt, porridge and huevos fritos Marguarita served us, we discussed the "legitimacy" of Israel and whether and whether this legitimacy was slowly fading or not. We talked about the Ecuadorian political reaction towards "Copenhagen" and could have talked the whole day, if Raymond did not have to bring us back to the hotel, up the steep Camino de Orellana. 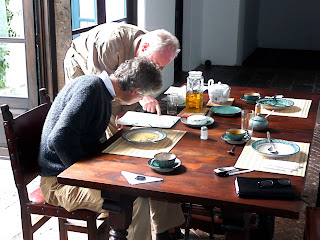 At the breakfast table: Hilbert showing Raymond where to find La Ciénega,
a múst for a German counselor....
Back in hotel Antinea, Sebastian came to bring us again to the University in the Cumbaya valley, where we had an appointment with the geographer Carlos Mena. Because he could only receive us in the afternoon we decided to drive to the valley of Yaruqui, where La Condamine had erected his controversial pyramids, both for his triangulation measurements ánd for the glory of "European science".
Daniel Carrasco, a friend of Sebastián who had joined us, asked the owner of a house under construction with a high, flat roof, whether we might take pictures from there of the Yaruqui valley. This time we were less lucky, but the friendly owner showed us where the Cotopaxi was lying behind the clouds. But at least we could see the Pichincha! 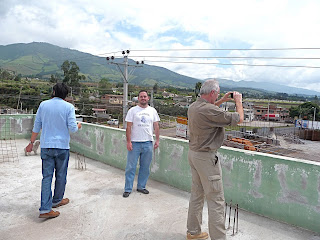 Sebastián, Daniel and Hilbert on the roof of a house
overlooking the Yaruqui valley
While Hilbert was taking pictures of the panorama, the heat and the noise of the nearby traffic prevented me from having the philosophical reflections Humboldt had when overlooking this valley: "How many things exist that man cannot see" (Chapter 1 of Neil Safier's book "Measuring the New World", Chicago University Press). For us, however, at this stage of the trip, there were too many things we cán see, with too little time to digest.....

Our view of the panorama of Yaruqui valley.
To the left the Cotopaxi behind clouds; in front the Pichincha mountain. 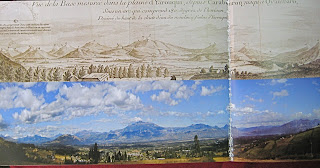 Upper frame: "Vue de la Base mesurée dans la plaine d'Yarouqui, depuis Carabourou jusqu'a Oyambaro" (1751). Note the roof of a house similar to our roof above.
Lower frame: a recent overview taken from the same point, somwhere near the town Yaruqui.
(from "Los Caballeros del Ponto Fijo", A. LaFuente & A. Mazueco(?). Libreria de la P. Salesiana).
Back at the University we were received by an enthousiastic Carlos Mena, who confessed that he would very much like to join us on our trip. He borrowed us a real GPS, the robust GeoExplorerII of Trimble Navigation Lim., 1996. So, finally, we know our position: 0o 12.2' S; 78o 29,4' W and 2799 m hight. 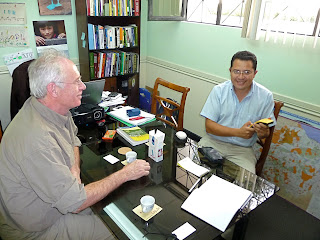 Hilbert and the geographer Carlos Mena
(Director, Maestría en Ecologia Tropical, Universidad San Francisco de Quito),
who kindly borrowed us his GPS  GeoExplorerII.
Back in the hotel we had a rest before Sebastián came to drive us to his parents house. There we were cordially welcomed by his father and mother, an uncle (painter) and another uncle (silver smith) and their wives. They showed us a movie about indian life in the Esmeraldas, the province governed by Vicente de Maldonado at the time of La Condamine.
We sat at a beautiful table with very colourful and tasty dishes, most unknown to us. Here, we also ate the sweet fruit of the "tomato tree", we had seen at Raymond Dequin's house.
The parents thanked us very sincerely for the way we had received Sebastián in Holland; thanks I accepted also on behalf of Tanneke and Bart who supervised Sebastián in the Molecular Cytology Laboratory. We left the house with the warm feeling of having experienced a South American hospitality so cordial and different from our European one (see also the blog "Bogotan experinece" posted 15-4-2007). 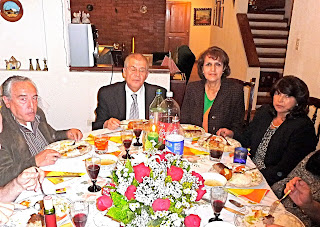 The colorful feast dish. In the center the parents of Sebastián.