From Belém to Macapá-1

Labels: Belém
9/3. Tuesday. This morning we leave the hotel at 8:15 a.m. and drive in a taxi to the "Embarque" where we had purchased our passage to Macapá some days before. People were asking us "Manaus??", but we said "Macapá!". We only understood that something was wrong... After a while the same man who had sold us the tickets showed up, brought us without many words to the other side of the busy street and signaled us that we shoud stay and wait. Finally we were put, together with a Japanese man (in Sao Paulo live 1 million Japanese), in a car with an old driver who was transporting an outboard motor on his back seat. We could sit next to it. Screaming under our weight the old car slowly brought us to another port. There, still in time, we could settle in an air-conditioned camerote (cabin) wíth toilet; what a luxury! 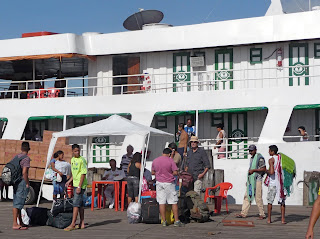 Hilbert waiting before embarkation on the "Almirante do Mar", that would bring us to Macapá.
Only the middle deck (with our camerote to the right) and upper deck can be seen.
On the upper deck we met two other tourists, a young Japanese couple, Iwasaki Tetsuhide (36 yrs) and Higashi Kanako. He was a buddhist monk who spoke english and portuguese as he had worked in a temple in Sao Paulo.  To my surprise he smoked; he told me that he was also allowed to drink beer and to eat meat! (How different from the Chinese buddhist I had met last year in Boston.) Kanako only spoke Japanese and didn't look too amused. And she had good reasons: Our middle deck only contained cabins while all hammocks were hanging on the lower deck with an incredible density, higher than we had experienced on our boat to Santarem. The hammocks were hanging at three to four levels and completely filled the space. The upper deck was relatively small but contained two huge loadspeaker combinations and a TV, showing singers and dancers screaming the same "song" over and over again. But the people were looking at it in full fascination. So, where else to go than on our middle deck? 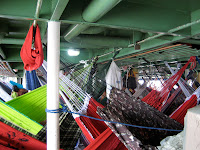 .
Left: Where can I hang my hammock? Hammocks in 3 to 4 layers on the lower dack. Right: Hilbert with Kanako and
Tetsuhide (third and second from the right) still on the upper deck. When the "music" started we fled to the middle deck.
But, apart from all this, after 4 days in a hot and crowded Belém, feeling the breeze when the boat took off and viewing again the wide, brown water was a pleasant experience. We could offer Kanako our bathroom and that made her very happy as expressed by her reverences. The people on the boat were smaller again and very kind; more like those we had met in Peru.
Towards sunset, we passed villages from where small canoes took off in the direction of our boat. With great skill they attached themselves to the side of our boat. They tried to sell fruits. Some passengers handed over some food and cloths. 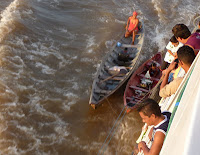 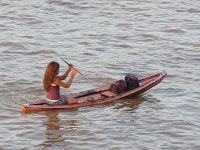 Left: Canoes with a boy and a girl: the boy jumps aboard and skilfully attaches the canoe to the side of our boat, while the girl is stearing. Right: A girl on her way to another world on the other side? 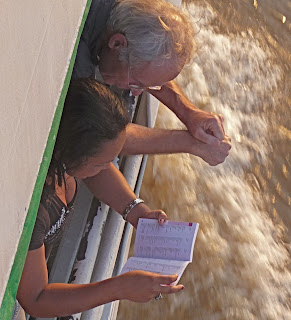 Hilbert receiving a lesson in portuguese and other things from a charming Brazileña.

Belém slowly disappears, while the boat is heading .....West, towards Ilha de Marajó!