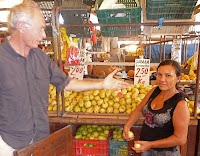 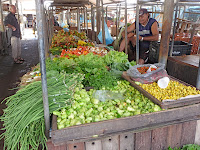 Fruitmarket of Belém: one of the biggest in the country.
6/3. Saturday. Immediately after breakfast we take a taxi to the port to buy a passage to Macapá. We had been told to ask for Ciptour or Paratour. We asked in many places and people kindly gave directions; finally we found out that Ciptour did not exist anymore and that Paratour was just not to be found. So, after visiting the old Portuguese fort and the fruit market we walked back to the terminal of the lancha's where a man indicated that he could sell us a passage for Macapá. We bought a cabin with baño for 180 Reales p.p. and went back for a siësta in our Hotel. In the evening an american from Florida helped me with the internet; he spoke portuguese and we made an appointment for the next day. 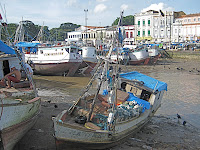 The port of Belém: as dirty as that of Djakarta.
Here the black Vultures seem to function as flying garbage bags. Are the White Egrets there only for the contrast...?
7/3. Sunday. After breakfast we walked with the american of yesterday evening, Steve West, to the Praça da Republica. He had to contact various people there with whom he had placed orders. On this Sunday morning at 9 a.m. the place was already crowded. Steve works for "Cross Trade" (see: http://www.crosstrade.org/index.html ). After having brought-up 4 children, Steve and his wife adopted 4 Brazilian children aged more than 10 years. In addition, they work for Cross Trade as Christians: "Our desire, and prayer, for each person we serve in Brazil is that they will experience God’s love, and through any blessings Cross Trade may bring, they will give thanks to the Lord and share generously with their others." 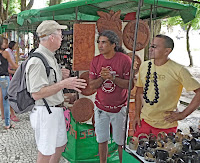 Walking with Steve West over the Praça da Republica.
In the afternoon we visited together with Steve the parc "Mangal das Garças". Again a beautiful parc with nice birds in a large cage. In a historic exhibition we found a drawing of a brigant with sail; we could not find a reference. 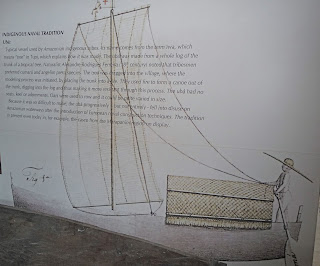 In the Mangal das Garças parc a drawing of a XIIXth century brigant.
Some Brazilian impressions:
- For tourists not speaking portuguese it is véry difficult to find your way.
- Everywhere in the hotels there are  saving bulbs (Philips?), but in the gas stations I never saw a car tanking alcohol.
- In the toilets you have to press an electric switch to flush. There is always a basket for used toilet paper, like in Ecuador and Peru and even on the lancha!
- People have never heard of La Condamine & Maldonado and also do not appear to be interested in this history.
- According to a lawyer from São Paulo, whom I met in the hotel, everything in Belém proceeds very slowly; he had been told that even a heart attack takes here two days....
- The more east you come the larger the chairs and tables, the better you can sit. Perhaps the people are also larger?
- In Brazilian restaurants beer is tapped from a huge, cooled glass put in the middle of the table. The service is very quiet, like in Colombia, unlike in Israel.
- There seems to be one gesture of either negative or positive understanding: a fist with thumb up.
- Parking in Belém seems to be no problem: everywhere along the streets men are waving with a towel to help you to park in or out.
- If I had to spend "church-money" I would try to organize the garbage collection along the streets in the same way. Steve thought that this was a good idea.
- In Brazil it seems that less women are pregnant or have a child in their arms than in Peru or Ecuador. Hilbert has many more observations on the women, which he will tell you when asked.