From Belém to Macapá-2 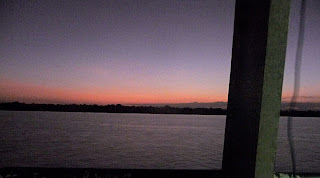 Sunset (9/3) and sunrise (10/3) viewed from our boat as we sailed past Ilha de Marajó.
10 and 11/3. Wednesday and Thursday. Tuesday evening Hilbert woke me up saying: "I found a person who speaks french and is also going to Oiapoque!". I immediately went with him and met a large figure on the dark deck. We spoke a long time about his journey and ours before I went to bed again.
At 5:50 a.m. it was still dark, but the sun was rising. People are cleaning the ship. Someone talking Brazilian to me, walks away and then comes back from the lower deck with a cup of sweet milk coffee. I can only say "obrigado". After 20 min, at 6:10 a.m. it is already light. 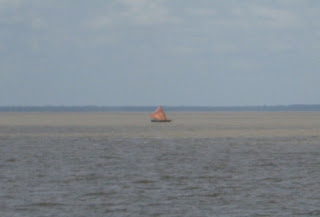 Only once we saw a sail on a boat in the far distance.
During this trip just half around the Ilha de Marajó, we obtained more than ever before a feeling of the vastness of these Amazon waters. We are going North-West and are about half-way between Belém and Macapá. Even what is drawn on our map as narrow channels west of the Ilha, appears to be a sequence of broad rivers or rather vast lakes. The Delta in Zeeland (Holland) will look very small when we will see it. What an immense task carthographers like La Condamine had when trying to map these waters. 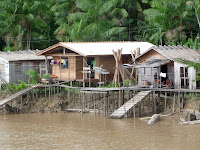 Typical houses along the coasts of this part of the Rio Amazonas.
Note the large satellite dish and the wooden planks with which they probably can earn some money.
Everything on the boat is still humid. On these waters we see no trunks or plant-islands. The land bordering the river is owned by the Provincia. The people living here are more or less illegal, but the governement allows them to stay. Most houses seem to be very poor. Regularly, however, we see larger settlements next to a wood factory. 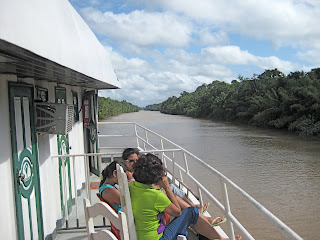 One of the rare narrow channels we went through; mostly we went over vast, wide lakes. 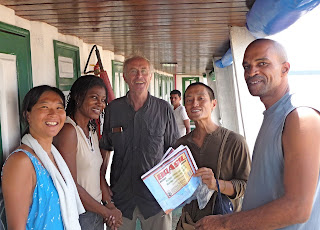 Talking with the only tourists on board. From left to right: Konoka, Marise Bianay, Hilbert,
Tetsuhide and Christophe Bianay.
(Again they told us that we resembled Clint Eastwood and Cousteau.....)
At 3 p.m. we arrive in Macapá. Christophe helps us to find a taxi on the busy quay. In spite of the crowd I could not identify "chorro's", young people looking for their prey. But Christophe was careful and told us to wait a bit before going down the gangway. It was nót his fault that we payed the taxi that brought us to the busstation (Rodoviaria) twice the amount he had agreed upon. At the bus station there were many people selling seats for different prices. It was not easy, but Christophe managed to get some last seats in a bus to Oiapoque leaving that evening. Otherwise we would have had to wait 24 h, because the buses appeared to be driving only during the night. 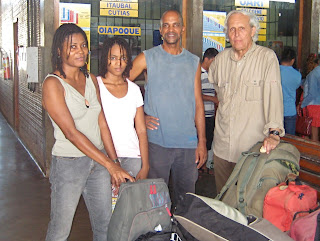 At the busstation in Macapá. Christophe with wife Marise and daughter Mona and a lot of luggage.
I had not been able to get enough satellites to measure a position in Belém. But now it went smoothly. Position: N 0° 4' 23'', W 51° 3' 17'' (altitude -24 m). I am using the GPS borrowed from the San Francisco University at Quito. What a long time ago was that! How much patience did it cost La Condamine before he could write down a position?
During his journey from Belém to Oiapoque, La Condamine was accompanied by a "black slave", Louis, originally from Cayenne, who had been sentenced to death by the french authorities (because of disobedience) and had fled to Belém. According to the book of Neil Safier (Measuring the New World; see previous blogs) the Potuguese governor  returned him to Cayenne "under the condition that he be spared the gallows, absolved of his crime, and returned to his rightful owner. La Condamine's canoe provided for his secure transport from a Portuguese prison back to the shackles of French servitude."
In our case it was the other way around: It was a descendant of slaves, Christophe, born in Guadeloupe, who helped us from the boat in Macapá to travel securely to Cayenne. 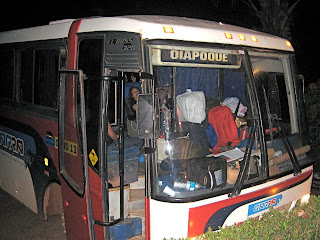 Our night bus on his way to Oiapoque at a stop in Cunani.
Note the luggage of "extra passengers" sitting in the entrance and the bags surrounding the seat of the bus driver!
We left the Macapá bus station at 6 p.m. The road was paved and the bus driver drove as fast as he could. We drove through a landscape with tree plantations on both sides. We couldn't see what kind of trees.... Then it became dark. The bus had no toilet, but stopped about once in 3-4 hours. The toilets at the restaurants became very dirty. If I understood his body language well, one Brazilian complained about it. After about 6 hours the road became an unpaved; red sand, many holes and one little valley after other. It seemed endless but after another 6 hours we arrived in Oiapoque, still in the dark. Christophe went on a mototaxi to the police station: it would open at 8 o'clock. So, being the only strangers, we had to wait before we could cross the border. I measured the Position of the Oiapoque bus station: N 3° 50' 27'', W 51° 49' 26''. We had left the equator..... 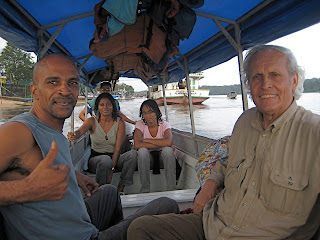 Crossing the Oiapoque river from Oiapoque to Saint George.
A beautiful white-water river over which French Guyana and Brazil are building a bridge.
In Saint George Christophe again led the way to the French border police and arranged a minibus to Cayenne. It was a beautiful, new road through a jungle that, even to a non-botanist, showed a large diversity of trees. In the distance we passed beautiful mountains (the Kaw Mountains?). Later I was told that this region contained 260 different tree species (Phil Boré).