From Manaus to Santarem 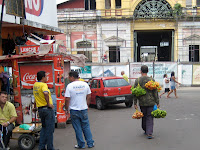 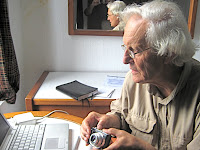 A little street in  Manaus just behind the port.
Writing my blog in a cool room and at a good table!
1/3. Monday.  GPS position Manaus: S 3° 8' 21'', W 60° 1'36'' and altitude 4 m.
Our "Best Western" hotel lies close to the old, run-down Hotel "Premier" were we stayed two years ago. Walking to the same port where we then arrived by boat from Tabatinga, we find an office selling lancha-passages to Santarem. Although the lancha only leaves next day, we could already go aboard and sleep that night on the boat.
How much cleaner and better organized does this quay now look! Only the market and the dirty little streets where they sell tons of watches and mobile phones have remained the same. It is a hot day, but we can stay in our cool room with WiFi until 2 p.m.; then we bring our backpacks to the boat into a camerote and leave again to eat a pizza and have a beer....

Left: At the site where we arrived two years ago on an old, crowded quay there has now appeared a nice terminal hall, well-guarded and clean.
Right: maximal water levels. The years 2001, 2003, 2005 and 2007 give average levels. 2009 was a maximum. At the beginning of this rain season the level still seems rather low. 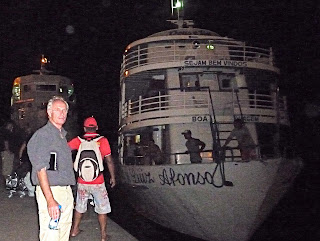 The lancha "Luiz Afonso" finally comes back....
When we came back from the terminal restaurant our boat, the "Luiz Afonso", had left. It was fetching cargo on some other place. After two hours of uncertainty, it was 8 p.m. when the lancha finally came back in the dark.
Our camerote has an airco, but when this was switched off at 12 p.m. a hot night followed without a single breeze. Orion is right above us. We realize that at their time, La Condamine and Maldonado didn't have an airco and must have experienced many of such hot nights. 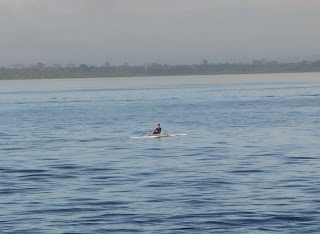 A skiff! The first rowing boat we have seen so far.
2/3. Tuesday. In the early morning Hilbert, who slept in a hammock on the lower deck, wakes me up: a skiff in the harbor of Manaus! How is that possible with all the rapid boats criss-crossing everywhere at full speed?
Then, close to our lancha we see dolfins. What are they doing in this dirty water? At 9 a.m. the lancha takes off; but only to go to another quay in the old, crowded part of the harbor. There, many more people come on board and the lower deck slowly fills up with hammocks. These are other people than in Sarameriza, towns people and less friendly. To my surprise I find the upper deck almost empty. There we meet Pontus and Raquel, the only other tourists on board with whom we can speak english (and try out our spanish...). He is a translator (from Barcelona) and she a journalist (from Florianapolis). They will go to Alter do Chao, east of Santarem. 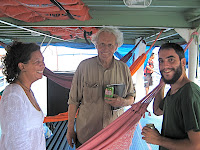 Unexpectedly, the lower deck completely fills up.
Raquel and Pontus, the only other tourists on board.

Finally, at 3 p.m. we leave the harbor of Manaus.
On the upper deck few people had placed their hammocks. In the afternoon we find out why. The lancha enters a kind of small tornado: big waves, only rain to be seen and very strong winds that could easily have swept away a child! The people shelter behind the bar and except for a cap nothing was swept away. Soon we could dry up in a warm afternoon breeze. At 10 p.m. I see for the first time a bright sky with stars and a full moon. The Great Dipper stands "upside down", its tail pointing to Arcturus high up above the horizon. We already passed the mouth of the Rio Madera. 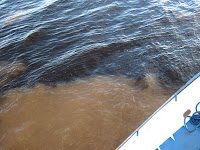 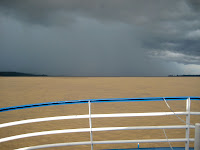 We leave the Rio Negro and enter the Rio Amazonas, here called Solimoes.
Rio Solimoes,now fully mixed with the Rio Negro, with an approaching storm.
3/3. in the early morning Hilbert has a present for me: a watch! He had bought it on the market in Manaus. Finally, I do no longer have to ask him ¿Qué hora es?. "Dank je wel, Hilbert!!".
Sometimes the river is full with large tree trunks, hundreds of trunks probably brought in by the Rio Madera. La Condamine already mentioned that this river is named "wood" because it contains so many trees  felled by nature.
At 8 a.m. we arrive in Parentins (AM). Some people depart. Many sellers of bread, cakes and fruits come on board. Within 15 min we are on the Rio Solimoes again. 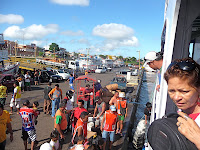 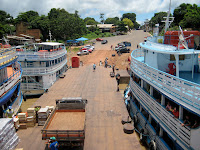 Short stops at Parentins and Obidos.

View on the narrow passage east of Obidos. 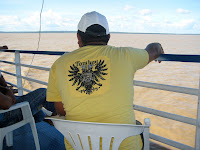 One of the passengers with a two-headed Eagle (like in the arms of Naarden) on his T-shirt, bought in Manaus.
Last toast with Raquel and Pontus: "buen viaje!".
At 12 a.m. we land at Juruti and at 3 p.m. at Obidos; very short stops. Finally at 9 p.m. we arrive at Santarem, where the police let us wait 1 h before we can land. But then, unexpectedly, everything proceeds very smoothly and well-organized. There are taxis waiting and no "chorros"! Soon we are driven through a deserted town to Hotel Barao Orla. There, at the entrance a long, slender person asked us whether we were dutch! It was Edwin Keizer, who worked in Brasil for Greenpeace, who spoke well portugese and who organized for us an english-speaking guide for the next day. He also gave us directions how to go to the "campinaranas" near Alter do Chao, where we hoped to see La Condamine's "Golden Monkey". 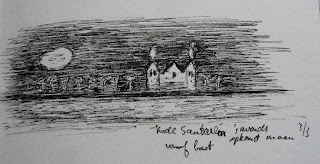 While waiting before moring in Santarem, a full moon rised above Santarem. 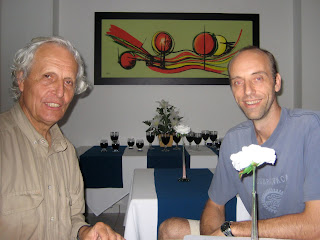 Edwin Keizer, sent by the "Amazonian heaven".
But we also talked about what he and Greenpeace were doing here. If I understood him well he was working as a geographer (remote sensing) for the Brasilian Greenpeace Organization. They were developing "agrocultural models" (?) that would be "better" in preserving Amazonia than those of the present Brasilian Governement. Their aim is to halt the destruction in what he called the "deforestation arc Rondonia-Mato Grosso-Para" and still make the people happy. We could have talked for hours about how to save our planet, but he had to leave very early in the morning for Mato Grosso. So, at midnight, we went to bed fully exhausted after a day of, again, diarrhea, caused by eating from a spoiled beefsteak in Manaus.....