Tabatinga-Manaus: flying over the Amazon 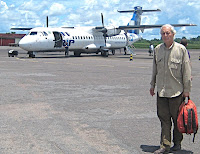 On the Tabatinga airport with our plane of "Voetrip".
28/2. Sunday. In the morning a girl, Jessica, from the hotel appeared to speak a littlebit english and portugese. She had been able to take lessons in a school for which she did not have to pay. So, we got our first lesson in portugese: "Até logo, Jessica; obrigado!". That girl will make it, I thought!
For the second time we have breakfast in the Leticia restaurant with Alejandro and Jose. Then they bring us to the hot Tabatinga airport where we took a flight with "Voetrip" to Manaus: 1150 km in 2.5 h. Two years ago it took us more than 3 full days by boat (see Blog 2007). Then we only saw the river borders. Now we could see what lied behind those borders: woods, marshes and rivers. 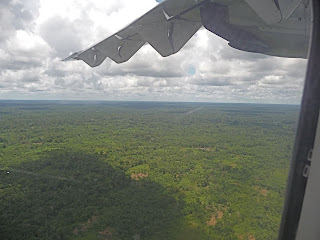 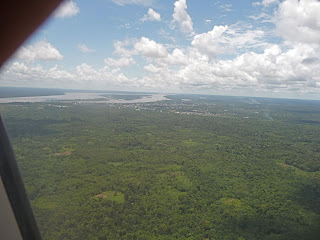 Looking back on Tabatinga/Leticia and the Rio Amazonas. 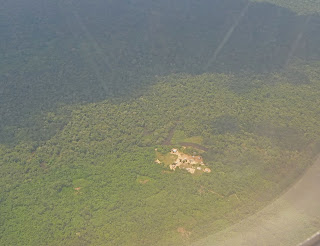 In the middle of the woods: a Petro-Station?
Spread-out in the woods, grey spots indicate trees without leaves. They or not dead, but just decided that it was winter. 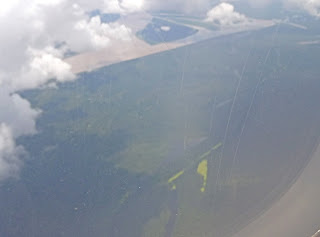 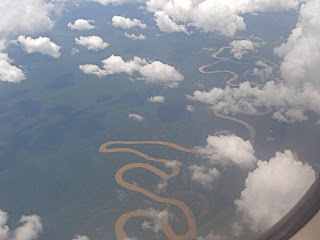 After some 20 min: Probably the Rio Putumayo near Tacuma. 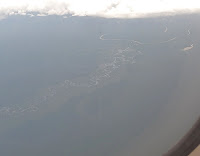 After 1 h flight. Left: unknown rivers and marshlands. Right: The Rio Amazonas.
How could they ever make a map of such rivers without flying over them? 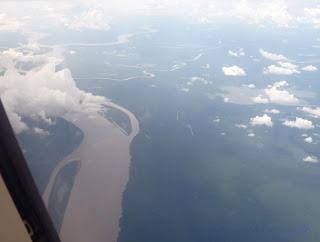 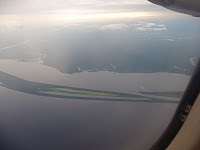 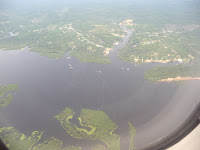 We are close to Manaus after 1150 km: the Rio Negro with narrow beaches.