21/2. Sunday. Somber weather, but no rain. Washurú has prepared a large box and asked me to bring it to his son in Iquitos. His son speaks well english and could help us there further. The well-taped box only contained cloths, "ropa". Of course, I immediately promised him to do so, but was it wise....? 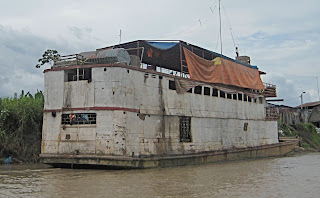 Our lancha "Monica Medina". Most other lancha's we saw looked somewhat better.
At 6 o'clock we walk to the boat where cows and pigs were still being embarked. We put our luggage and the box in our "Camerote#1" and say cordially goodbye to Washurú, who introduced us to César, the owner of the boat whom he asked to take good care of us.
We hang our hammocks on the upper deck in the back where there was still much space. When it became clear that the boat would not leave before 8 I walked back to buy some bred.
In the street I met again Washurú who brought me to the bakery, where he asked the owner to show me the oven. We had to wait for a new batch of the small breds. When they finally came the village people were first served in spite of the urges of Washurú: 24 small breds for 3 Soles (~$1.=). 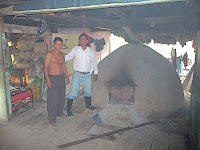 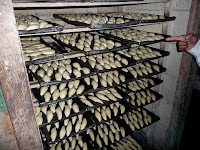 The oven of the bakery of Sarameriza and the small breds that still have to become baked.
Back on the boat we measured the position of Sarameriza: S 4° 34' 2'', W 77° 24' 55''.
And then, indeed, we leave without much fuss or waving the muddy place at 8 o'clock. The Cerro de Campanquiz slowly disappears behind us in the clouds. 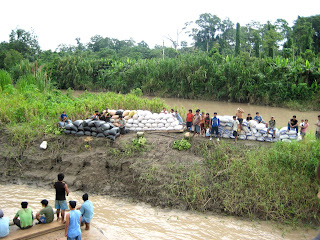 The whole village is waiting for the lancha to load their heavy cargo.
Almost every half hour the boat stops at one of the borders of the Rio Marañon; then it becomes humid and war. People are waiting with huge bunches of platanas (bananas) or heavy sacks with mais (corn). Sometimes a whole village is standing there, watching how their stronguest, young men carry these 70 kg(?)-bags on bare feat into the boat. Also animals, this time a bull and sheep, are brought in; pulled and pushed down the muddy slope and up over narrow planks into the boat, where they are all put together into one box on the front deck.  Hilbert saw how part of the ears of pigs were cut off in order to distiguish them from those already present....Ultimately, the box will contain 3 cows, some 20 chanchos (pigs) and 9 obejas (sheep). In this crowd a male obeja immediately starts to fulfill his biological task.....Is this the way we treated our slaves some 150 years ago? This is not a tourist boat and members of the dutch "Party for the Animals" should not come here. This is a working boat where the people hope to earn some Soles. 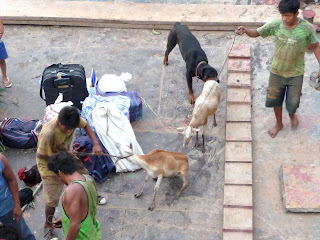 Was this the way we treated our slaves some 150 years ago?
One of the passengers on our upper deck carries a baby monkey with him. Watching from my hammock its behavior during the long day made me wonder why it took me so many years to discard the idea that there is a fundamental difference between man and animal: of course, there are differences, but will the neurobiologists be able to find a fundamental one?
La Condamine drew a seemingly similar conclusion (p. 62 of Voyage sur l'Amazone): "...l'homme abandonné à la simple nature, privé d'éducation et de société, differe peu de la bête.", but this applied to the Indian rather than to himself.
The baby monkey is a "Chorro", not a Makisapa (baboon) as I first thought. It likes very much the sweet, cotton-like inside tissue around the seeds of the long guava fruits. Pehpeh, the baby choro, sometimes cried when hungry or thirsty.
Edgar (12 yrs), whom we had met in the village and who had helped me carrying the box into the boat, came shyly up from the lower deck, where most indigenes or mestizos were lying in their hammocks. I asked him to draw his house, but I first had to draw my own... The children are clearly hungry. Another passenger, Juan Carlos (who had searched me in the village when I was buying bred because it was becoming late), gave them some of his little breds (ours were down in the camerote). 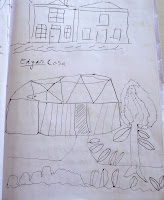 The drawing made by Edgar of his house somewhere near Sarameriza: a cacao-tree?
Only in the second half of the day we encountered three times a "Chaloupa", which can transport some passengers and contains a little roof (carapa). One is called "Transporto Marona". We had just passed the mouth of the Rio Marona. Perhaps we could have continued our journey on such boats. But we should have been able to speak better spanish and we would have needed mány more helpful Washurú's...... We were told that there were only two boats like ours ("lancha's") connecting Sarameriza with San Lorenzo. 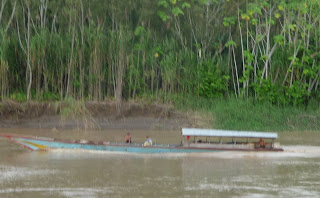 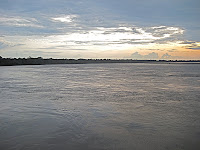 View from our hammock; here time passes quickly.
It is already dark when we arrive in San Lorenzo, capital of the Provincia de Datem de Marañon (?). Its position is: S 4° 49' 54'' W 76° 33' 22'' and an altitude of 136 m. Here we will stay for the night. Edgar and his brother come to say farewell. We give them a coloured ballpoint and a compass. Edgar waves many times back before disappearing in the small crowd leaving the lancha. 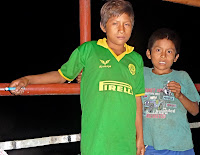 Edgar and his little brother. A shy friend came to say goodbye.
22/2.  Monday, the second day on the lancha. It is 5:30 h when we are woken up by the crowing of the many cocks in their little baskets tied on the floor. Slowly new passengers enter the boat. Also our deck is becoming full. Without any words or comments, new hammocks are being tied  up in places where there seemed not space. The trick is that you can hang them alternatively high or low! Next to Hilbert comes an ever-laughing 7th-day Adventist: "Ah, mi hermano..ha, ha, ha.". The owner of Pehpeh comes in completely drunk; he will sleep the whole day. We finally depart with full decks at 9:15 h. 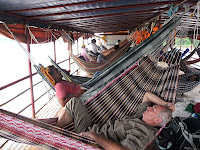 This second day on the lancha our deck has become completely filled up with hammocks.
We pass the mouth of the Rio Pastazza. Maldonado came down this river from Quito (he met La Condamine in Lagunas, where our boat will not come) without Morainville, who apparently died on the way.
Our lancha continues to make stops for new cargo. How many sacks and pigs can still be loaded? Now, at the stops, village people come on the boat selling fruits. At 2 p.m. we go through a tropical rain shower. One hour later it is dry again. I hear the Adventist preaching, telling his neighbour that the Catholics have wrong ideas. Juan-Carlos joins the discussion. Luckily, my spanish is insufficient to do the same. We meet Cyro Schmidt-Schüler from Lima, working for a wood company in Iquitos. He can only say "scheisse" and he knows that the dutch have strong mariuana....
At 7 p.m. it is dark again and we enter a new rainstorm. We have to pull our hammocks up higher; everybody is helping others. How does the boat find its way in this pitch darkness? It appears they only have a strong lamp. Via the radio they here where new cargo is waiting.

New cargo from whole villages or a solitary house.

Every now and then we enter a rain shower.
23/2. Tuesday. 5:30 h. We pass Miraflores. Position: S 4° 40' 25'' W 74° 50' 11' and altitude 130 m. Again, we make many stops. It becomes warm. Juan Carlos entertains us by giving Kun-foe lessons. Everybody is very impressed.
At one stop a large family has come in and find still place around us. We give Marcial Vela Tulumba, a young boy from Borja and his brother Ramón, a balloon. It costs him great trouble to blow it up. 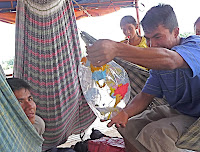 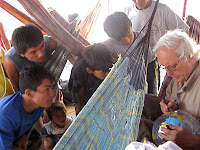 We give a balloon to the two brothers of Borja, who helped us several times with displacing
our hammocks and who were happy to get our meals. Right: depicting the route of La Condamine and Maldonado
on the globe. 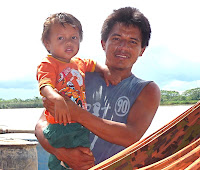 Left: Cesar, the owner of the boat, whom I told about our journey, sticks our folder on the wall of his bar.
Right: a proud father with his son. Although, on this upper deck, a railing is lacking on the back, these children
freely walk around.....