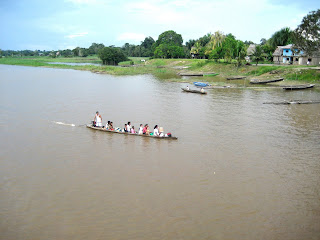 New passengers are brought in with a "peque-peque"
23/2. Tuesday. At 1 o'clock p.m. we pass the mouth of the Rio Sameria. Position S 4° 38' 39'' W 74° 17' 19'' and altitude 133 m. With great dexterity and almost unnoticed hot plates with our lunch are "served" through the maize of hammocks. The monkey Pehpeh is continuously twittering or crying. We are not allowed anymore to give it something. The children, all very nicely dressed, eat their meal with a spoon, sitiing with two in a hammock or on the iron floor. All garbage (plastic bottles and sacks) is thrown in the river. 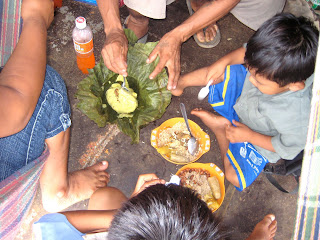 Meal on the floor under my hammock.
A.t 3 p.m. we pass the mouth of the Rio Tigre. Position S 4° 28' 33''  E 74° 4' 38'' and altitude 120 m. At 8 p.m. we arrive in Nauta. From here many passengers take a taxi to Iquitos. We will stay on the boat together with the "Borja-boys". We cordially say goodbye to Juan-Carlos and the Adventist, stll laughing "Es hermano...".
Unforseen and unexpected experiences
One surprise of our trip so far is that there remains so little time for writing or drawing, that there are few opportunities for reflections or watching birds, that we are often só tired (because of the diarhea that already had struck Hilbert, but now on the lancha also me?) and that there is never a chair where one can sit at a table. Even when passing the Pongo de Manseriche, La Condamine pictured himself on the raft sitting at a table....(see the 1751-etch in a previous post). 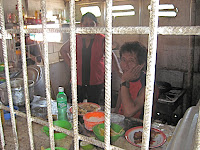 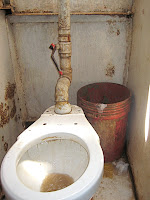 Dangerous hygienic conditions....
Left: The open kitchen bordered by the toilets. Right: One of the water closets; not to be seen is the tap
on the low plafond, serving as shower and deadly for longer persons standing up in the dark...
Many people on deck are coughing, sneezing and spitting all the time. Handkerchiefs (pañuelos) are not used. And then there is the hygienic condition of kitchen and water closets: The kitchen is open and borded by four terribly dirty closets that also serve as shower. The shower is represented by a tap that could be mortal for longuer persons. There are no lights, but enough, brown river water. How is it possible that both men and women emerge from these pig kennels looking refreshed and nice? For me it was reviving the experiences in Java some 66 years ago....
Already at 4:30 a.m. we arrive in Iqutos. When it becomes light the boat is unloaded. Many people go on and off the boat. Cesar told us to stay on board because there are many "chorros" (robbers). Waiting in our hammocks on the now almost empty upper deck, some  8 young men (those who had helped unloading the boat?) came standing on the rear deck and looking curiously at us, gringo's. We thought that they were waiting for new cargo to be brought in there. When Hilbert went to our Camerote on the lower deck, they had suddenly disappeared. I didn't suspect anything. But when I also went to our cabin Hilbert told me that they had robbed him when going down the iron stair. We lost "our pot" with some 100 Soles. After this experience I decided to give the box of Washurú to Cesar. He would call Washurú's son and deliver the box to him. When I called the son later, all seemed to be okay. Cesar brought the boat to another place where we went safely through a police control from where we took a mototaxi to Hotel El Dorado: A larger change from poor conditions to luxus is hardly possible.