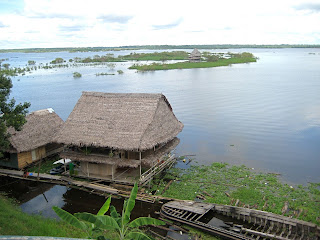 Floating houses in Iquitos-Belén.
24/2. Wednesday. This day we enjoyed the luxus of Hotel El Dorado, while recovering from our "Lancha"-diarhea. We made plans with Alfredo Chavez, an ornithologist, who could bring us at 5 o'clock next morning to a place for watching birds.... 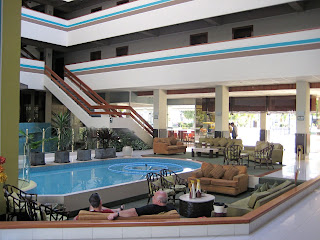 Hotel El Dorado.
25/2. Thursday. At 5 o'clock we are waiting in the hotel, it is still dark. Towards 6 o'clock Alfredo finally shows up with a mototaxi. It is full  daylight and already very warm. We visit a piece of land where a shaman is living under very poor conditions. We see his hut where the "ceremonies" are carried out with the help of the hallucigenic leaves of the Ayahuasca (Vanistiropis?) plants growing here everywhere. His little son leads the way. We see a Blue-Gray Tanager, but that is all; many flowers and fruits, a brown frog and a centipede. On the way back we visit the well-known parc Quistococha, where we see many animals from the jungle in captivity and not always looking healthy. 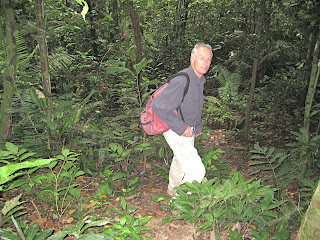 Walking through the jungle: its hot and humid and we are still in a bad condition.... 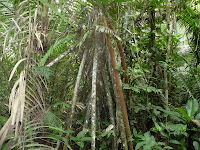 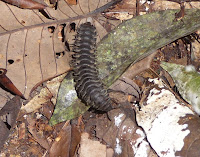 A "walking palm" in la selva, the jungle, always intruiging. A centipede of about 8 cm.
In Iquitos there are hardly automobiles. Our hotel has a nice bus for tourists, but we were happy that we choose Alfredo with his mototaxi. 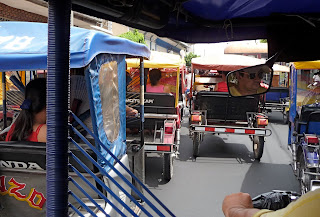 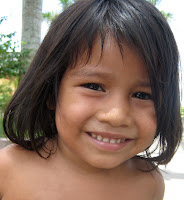 The streets of Iquitos filled with mototaxis and a friendly, little boy in town.
26/2. Friday. At 5 o'clock again we leave the hotel to take a Golfiño, a rapid boat that will bring us in some 9 hours to Santa Rosa, near Leticia/Tabatinga. We leave at 6:30 a.m. with some 20 people at 70 km/h. Every 15 min or so the boat has to stop because of some garbage in the propeller....; not surprising!
We enjoy the familiar river-image: on both sides the green borders with a brownish, earthen dam of ~1.5 m, in front waterplants and behind low woods with isolated, higher trees often with white trunks. Once in a while banana-trees, a little house, some smoke. There are very few other boats to be seen. Once we pass a big boat loaded with tree trunks slowly going upstream. The service in the boat is almost like in an airplane, the food is good.
After 3 h we pass Pebas at the mouth of the Rio Napo. According to La Condamine this was the last of the Spanish missions. Two and a half hour later we stop and moor at San Paulo or Saint-Paul, the first of the Portugeese missions. It took La Condamine 3 days and 3 nights from Pebas to San Paulo!
Our boat ("deslisador") is sometimes in the middle of the river, then again at one of the borders. It is avoiding the large trunks floating everywhere in the stream. The raft of La Condamine folowed the river border with the risk that a tree trunk would suddenly fall down. 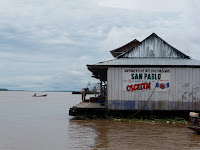 One of the many rain storms we encountered.  -  San Paulo (Saint-Paul).
San Paulo is still a leprosy village, like in the time of Che Guevara (1953), who came here to help.
From there on, La Condamine travelled in bigger boats ("brigantes") driven by 40 rowers (!) and a sail. We have never seen a rowing boat nor a sail.
We met one of the passengers of the boat, Nixon, who worked for Petro-Peru in the jungle. He found the work "bastante complicado". He said that he would ask his brother, who was a guide in Leticia and who would pick him up in Santa Rosa, to help us. So, when we arrived at 3 p.m. in Santa Rosa, we were led without difficulties to the emigration and police offices and then, with a peque-peque we left Peru and arrived in Tabatinga (Brasil) at the other side of the river. Nixon then brought us to Hotel La Frontera, at the (open) border with Colombia, where we called Alejandro Jaramillo. It was a cordial meeting-again, also with Jose, who now had a new car! 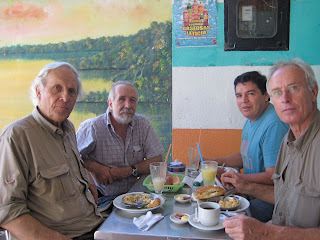 Breakfast in Leticia with Alejandro and Jose.
27/2. Saturday. This was a day of organizing our trip. We called Marc van Roosmalen in Manaus and learned that he would not be in town before March 10. We went to the banc (pesos, reales or dollars?), to the emigration service, to the Fundacion Gaia Amazonas for which Alejandro is working and had dinner (ajiaco bogotana!) in the house of Alejandro and Marthamiamor. After dinner we made a walk to the Rio Amazonas, where very poor people lived. It was too hot for us, but children played, mothers were feeding their babies and men were reparing their wooden houses that would soon become (almost) flooded again.
In the evening, like two years ago, we ate fish in the Libaneese restaurant, where we gave balloons of the globe to the boys of Jose. 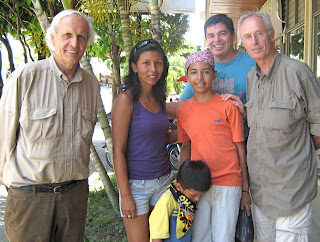 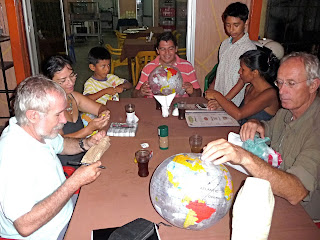 The route of La Condamine and Maldonado depicted on the globe in the Lebaneese restaurant.