La Condamine had a list with indian words in the language of several of the tribes he thought he would meet. He remarks that the words “mama” and “papa” in the Omagua-language have the same meaning as in european languages. Now, "the indigenes" of the tribes we met, the Jagua, Tucuma, Cocama, all spoke spanish. La Condamine was guided by people sent by the missions he passed. Thanks to my colleague Antoine Cleef, we were guided by his friend Alejandro Jaramillo and his chauffeur Jose Rodriguez; they seemed to know everybody in both Leticia and Tabatinga. Jeronimo was our spanish translator! 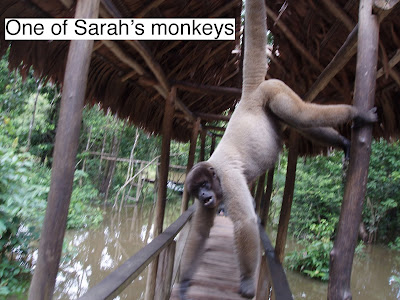 On April 19, Alejandro brought us in a small boat to the Amacayacu National Parc. There we met Dr. Sara Bennett, an american biologist, who is living already for some 15 years with her monkeys and other animals, treating them as human babies (...). We stayed for the night in the indian village Puerto Nariño, in hotel "Casa Selva”, 80 km west of Leticia. Policemen showed us a captured anaconda of about 10 m. The snake was not hungry, because the hen, given for food, was sitting on top of the curled-up snake, seemingly unaware of the future danger.
La Condamine observed dolphins ("le dauphin d'eau douce") and lamantins. We saw about 10 dolphins, sometimes clearly showing their pink color, and many kingfishers (Ringed kingfisher, Ceryle torquata). In the evening we saw the bright stars La Condamine used for his position measurements and always Orion. He also measured the flow rate of the river and the depth. He found the river to be 28 “brasses” deep which conforms to about 45 m (1 brasse = 5 pieds; 1 pied + 0.32 m). According to Archimedes, the captain of our little boat, the depth of the Amazon near Leticia was 42 m and the flow rate 8 km/h. Downstream his boat would reach a velocity of 45 km/h!
One thing La Condamine will not have seen is the transport of tree-trunks from the rainforest. This was the first one we saw; until Manaus we didn't see any others. 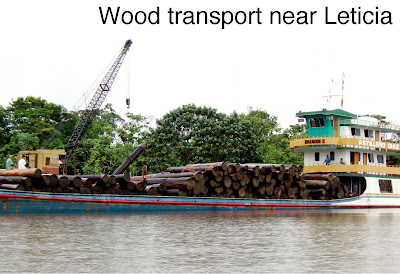