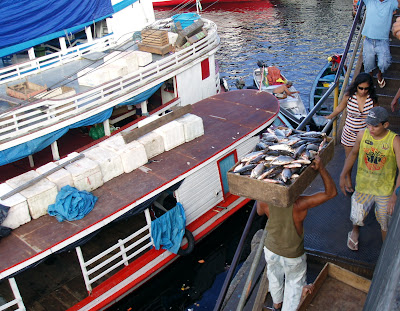 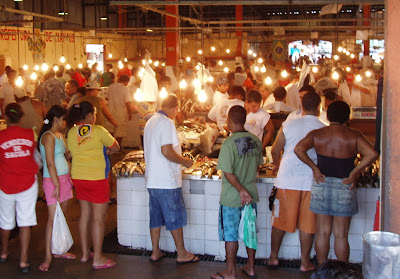 Port and market in Manaus
In Manaus you can buy watches or telephones “per cubic meter”. All historic museums appeared closed or were in a process of reconstruction (e.g. the Instituto Geografico e Historico do Amazonas). We stayed in the run-down hotel “Premium”. After a luxurious dinner in the italian restaurant “Fiorentina” we went to the bus that would bring us through the night to Boa Vista (some 900 km). The comfortable bus hardly stopped; walking in it was almost impossible due to the bumpy road. When it became light we saw a depressing landscape of burned fields with solitary, dead trees and some cows (near Novo Parais?). In the distance cone-shaped mountains. 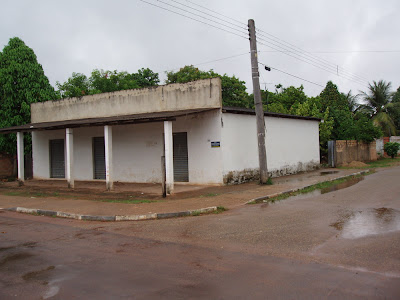 Bryan's house in Boa Vista, where the goldseekers gathered

In Boa Vista (25-4-2007) Bryan C., the brother of our host in Surinam, came to fetch us in a taxi. He had not been allowed to enter Brazil with his minibus. We had a shower and breakfast in his house in the outskirts of town, where some passengers-without-passport were already waiting. For $250 (?) Bryan will bring them to Paramaribo. It took a while before we understood that they were already waiting a few days: Marinaldo Asousa Silva (from Maranhao, Brazil; 40 years), two young boys, Weskley (from Lago da Pedra) and Marcus (also from Maranhao); then there were two women, Sandra (from Colombia; 35 years) and Rossi (from Brazil; 40 years) who were running shops in goldmining camps.
On the 26th more people came: Edneia, with two girls Rosangela and Roseane (not her own children), all from Para and Socorro from Boa Vista. In total (the four of us included) we would be 19 adults and two small kids packed in two minibuses together with the two drivers, Bryan and a Guayanese chauffeur.

La Condamine travelled in a time when the spaniards were still seeking gold in the Andes. Presently, the exploitation of gold has become very restricted in Brazil. As a result, many brazilians migrate to Venezuela, Guyana or Surinam to find their luck. That is also the reason why our group consists of some 6 men and 3 women that want to search gold in Surinam. All seem to know about the danger of the mercury that they will use to separate the gold particles from the water-sand slurry. But do they realize the long-term health consequences of inhaling evaporated mercury when they heat the gathered “black gold” (gold-mercury amalgamate) with a flame?

Collection of "black gold" - the evaporation of mercury with a flame
(from http://www.ehponline.org/docs/2001/109-10/focus.html)

After waiting the whole morning we went by taxi and bus through a savannah landscape to Bon Fim, the brazilian frontier town at the Tacutu river. A small boat brought us to hotel Torquato on the Guyanan side of the border. Bryan had told us that we would go the next day to the police station of Lethem. When we arrived, Bryan and his goldseeker-passengers were already there. More travellers came through, but did not stay. Our group seemed happy: together with Sandra, a colombian “rola”, we had dinner, played cards and drank beer. Everybody was tired and we went to sleep. 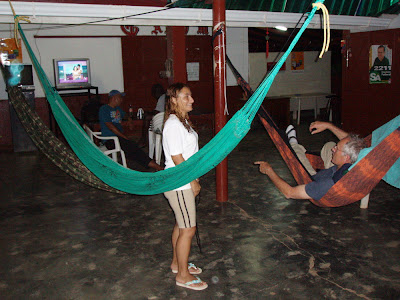 Sandra and Hilbert going to sleep: a few hours later nobody woke up

27-4-2007. At half past 3 I woke up: a man was standing beside my hammock. He spoke well english and asked for money to bring him across the river. He said he was one of the boatsmen, his name was “Rocky”, and he showed me where his boat-motor was. Apparently, this young man knew the way in the hotel. He convinced me and I decided to look for the 10 reals he was asking (3 €). When I tried to sit on my hammock in the dark I fell backwards on the floor making a lot of noise. Nobody woke up, not the guard, not Hilbert lying beside me, not a dog! I brought him to the open gate and he advised me to close it. Then he disappeared on his bicycle in the dark. I looked with satisfaction to the bright stars and the fireflies and went to sleep..... The next day the hotel owner said that “Rocky” was indeed a boatsman, an old man. Bryan said he must have been a robber. 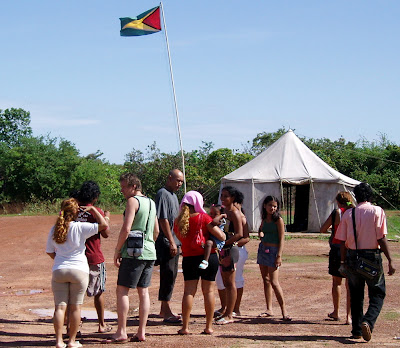 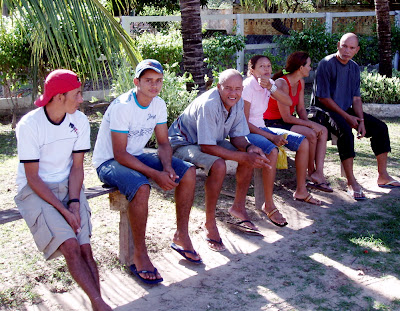 Bryan (right) and some goldseekers

The whole morning Bryan was occupied with “organizing” the necessary stamps and documents for his passengers. We finally left at 2 pm going north full speed through a beautiful landscape, the Rupununi savannah. We were amazed seeing the many ant-hills. We had to traverse many small bridges and after the 14th we got a flat tire. 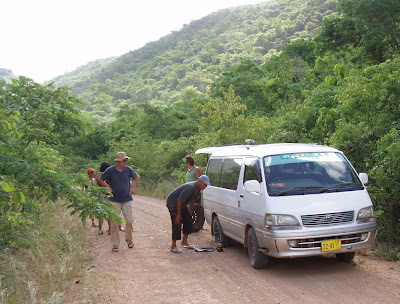 A flat tire after the 14th bridge 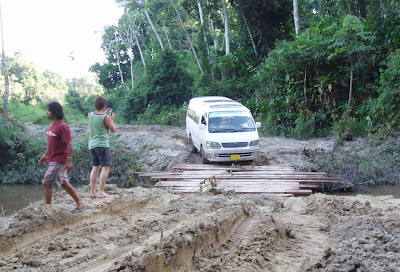 One of the 36 bridges we had to cross 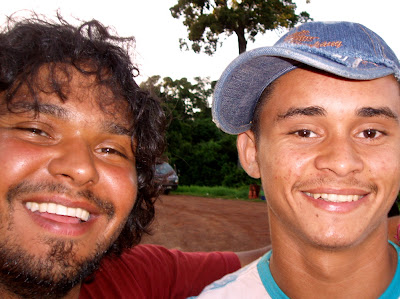 Jeronimo and "Junior", one of the goldseekers 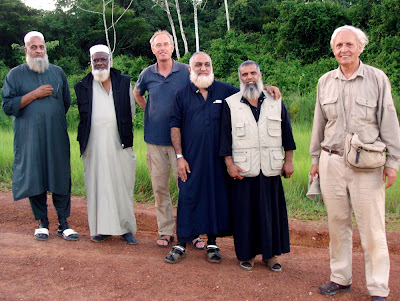 The group of moslims from Durban; Mahomed Khan stands next to me

Towards the end of the afternoon we reach just in time the ferry at the Essequibo river. There another bus with bearded moslims from Durban (South Africa) is also waiting. I approach them and realize that for the first time in my life I can speak with moslims from about my age! They are religious people, but one of them, Mahomed Khan, believes in the separation between religion and state and agrees that the story of creation should be told as a myth and not as a truth.
We have dinner in a restaurant at Kurupukari and Bryan has a short sleep. A truck driver, transporting wood and a hindustan family camping on the truncs, tells me that a few years ago the distance Lethem – Georgetown (500 km) took him 10 days!

In the middle of the night, at a “chineese village” owned by a wood company, we were halted. This time, the policemen, who had specially come down from Georgetown, didn’t want to accept money. The local police “allowed” them to check all luggage for weapons, but not the passports or other papers (“manifests”) of the passengers. There was a lot of scolding between them.


We had lost time at the police check and raced to Georgetown, where we made a short stop at a run-down hotel. There were a lot of junks around. But we drove further, faster than ever. On a street, sided by beautiful lotus flowers, and full with cars, bicycles, dogs and people carrying babies, boxes and baskets, we could reach a velocity of 100 km/h on the meter. But we were in time for the two ferries, first over the Berbice, then over the Corantijn: We, that is those in the “legal bus” carrying passports, were in Surinam. The others were taken in little boats over the Corantijn, where a Surinam bus would take them over and bring them to Paramaribo. Due to formalities on both sides of the borther, we arrived 4 h later at hotel Perola in Paramaribo, where the others had arrived safely. 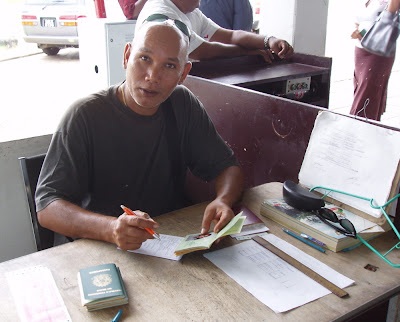 At Springland ferry (Corantijn): Bryan at the desk of a policeman doing a quicker job...

For some 30 h we had experienced “another world”, that of kind, smiling people, who took the risk of travelling this way and who never complained, knowing that that wouldn’t help them. We wish that they all find their “el dorado”. 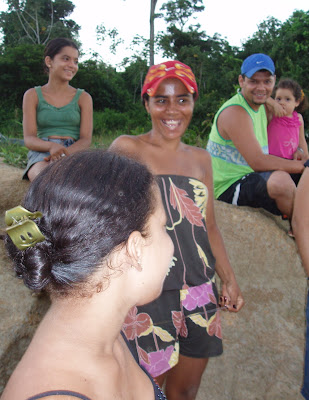 Waiting for the ferry over the Essequibo river: no complaints!

On his next trip, Bryan was arrested by the Surinam police and had to stay 3 days in the prison of New Nickerie. He had told us about the accomodation: 30 people in a room with one hole in the corner as toilet.....