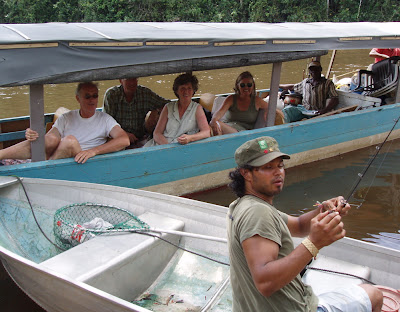 With two boats to Stondansi
Just before dawn Boudewijn woke me up: we listened. Far away we could hear the howling baboons! The Nickeri river streamed quietly, perhaps 2 km/h. We listened how more and more birds started their songs and screams, while a cloudy sky became more and more red. This night-of-the-full-moon Jeronimo, Hilbert-Jan and Hilbert had joined a hunting party in the boat of Dennis. Luckily, no eyes had lit up while they were searching the river bank with a strong flashlight....
Yesterday, the eight of us had embarked at the ghosttown Wageningen on the boat of Paul de Boer. We know this fisherman and hunter, born in Paramaribo, from our previous trip to Wonotobo in November 2005. This time he had two helpers: “Shorty” (a guayanese from Georgetown named Makres Renne) and Muna Rampersad (a hindustan from Nieuw Nickerie).
In the afternoon we reached the indian village Tapuripa (64 people). The “kapitein”, Petrus Sabajo, welcomed us. During the internal war (1986-1992), many of the Arowak inhabitants had fled from the village. Slowly, they were coming back now; also the teacher, so school will probably start again after the big holiday. 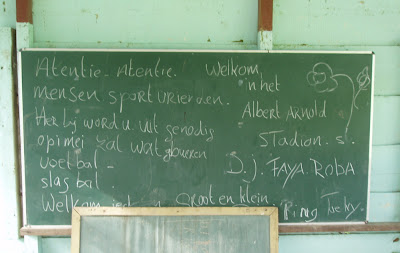 Blackboard in school with an announcement for celebrating May 1st

3-5-2007. A guayanese, who is living here with his indian wife and son, brings us in the boat of Dennis to a Hevea tree, here called “balatabon” or “bolletrieboom”. There are apparently not many of these trees anymore. La Condamine already reported about the milky sap or latex that could be obtained by cutting the bark of the “Hevea”, a name taken from the Equadorian indians. The name for the rubber substance, “caoutchouc”, is probably derived from the kechuan language of the Peruvian Incas. The tree I saw was most likely the same as La Condamine sent to France: Castilla elastica, which differs from the Hevea brasiliensis occurring south of the Amazon (see http://www.bouncing-balls.com/timeline/naturalname.htm).

Around 9 o’clock we continue upstream the Nickerie river. We are escorted by two Green kingfishers and groups of Water tyrants, flying low over the water. On both sides of the bending river the ever-changing pattern and colour of leaves and the many shapes of trees fallen from the river banks keep our attention. The Nickerie relates to the Amazon as Zion Canyon to the Grand Canyon: the bamboo bushes, the butterflies, the beautiful flowers, the Scarlet macaws (Ara’s) flying over, are all so close to the naked eye! 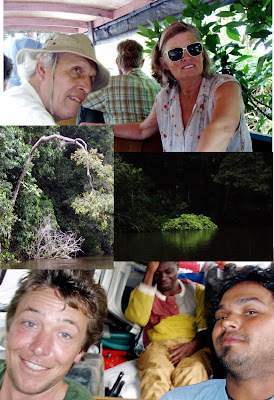 In the boat: always something to see
Except for the two motors on our “korjaal”, the wooden boats that took La Condamine down the Amazon, 14 m long (44 “pieds”), 1 m broad, may not have been much different. During the ride we are served rice with some meat and salad by Shorty, the guyanese cook. What food would have been served to La Condamine? Would the indian rowers have had the opportunity to fish or hunt like our guides? In any case, La Condamine will have heard better the sounds of the many birds in the wood. We could only hear the loud and typical scream of the Piha above the noise of the motor. 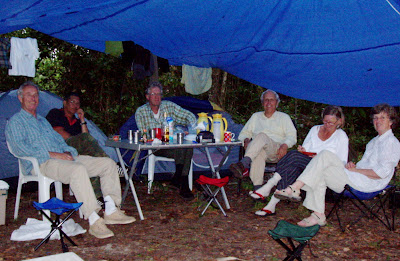 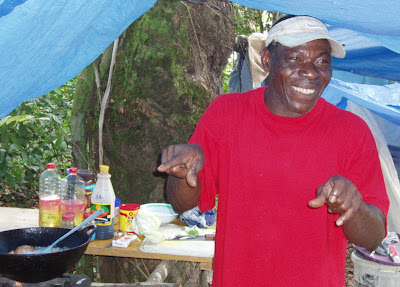 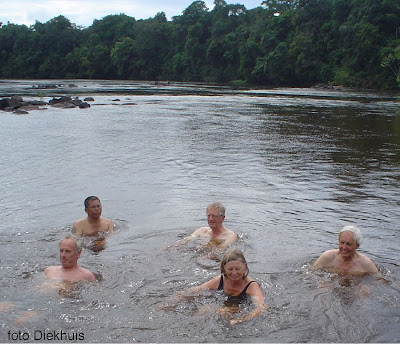 This time the hunters went out before the full moon came up! Now, in the dark they shot two "hares" ("hazen"). Muna cleaned them skilfully. On our way back we made again a stop at the indian village Tapuripa. There, Dennis bought a young "hare" from an indian for 100 SRD (~30€). The young animal, probably an agouti, walked free from care around in our boat. It will be a pet for his son Denny. 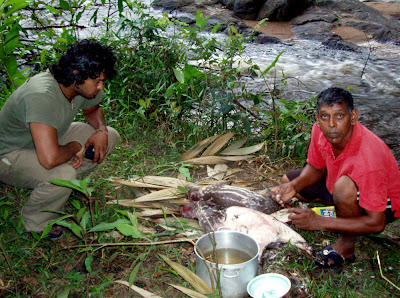 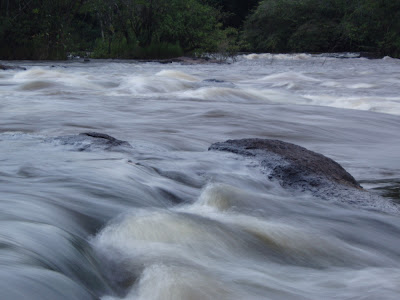