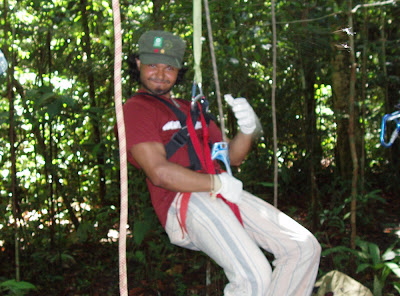 On our way to Tanimboca we passed a site where “terra preta” had been found. I even looked with the microscope at samples from this site (obtained from Juan Carlos Berrio, University of Leicester, UK) ! But what could I do here now? The site was a 100 m from the road into the jungle and the others were waiting in the car at a temperature well above 30 degrees..... With admiration for those who had discovered this site I joined the others. For the rest of the trip I forgot about terra preta, about which I had been reading a lot. After all, La Condamine didn’t know what it was. It was he who remarked that places where Orellana had found large populations of indians, were now deserted.

At Tanimboca, 8 km NW of Leticia, we were hoisted up to a platform some 35 m high, overviewing the canopy. Then we had to slide to another tree with a pulley. I now admired the indian instructors who skilfully played with our lives (I still weighed 93 kg!). At this time of the day few animals defied the heat, but it was a great experience anyway, especially the canoe trip through a black-water creek, where we saw the Mariposa diurna and where we heard for the first time the call of the "piha", heard so often in the jungle of Surinam. 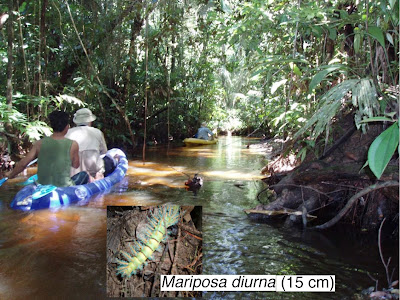