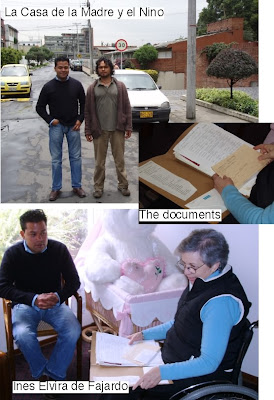 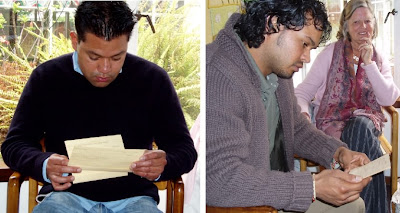 As a younger member of the french expedition (he was 30 years) La Condamine had a mission to fulfil in Quito. By chance, he ended up in Paramaribo where he could get a boat to Holland.
After our visit to Paramaribo in 2005 we wanted to come back to Suriname. But what brought us to Bogotá in the Andes?
We wanted to visit again “La Casa de la Madre y el Niño”, for a third time after 29 and 32 years, together with Marius and Boudewijn. For the third time we were sitting in the waiting-room, but this time together with our two sons. And it was still Ines Elvira de Fajardo that came to inform us, showing us all the adoption documents they had in the archive, the only connection to the roots of Antonio Fernando and Jeronimo Pico.....She also showed us the whole Casa, which had extended considerably.
With her 40 years of adoption-experience she examined the two young men asking them how they felt and what they were doing. They were asked to write their feelings in the special guestbook. Then she made a picture of the four of us, which ended the “ceremony”.