For our trip we could use a detailed map (ITMB 2000; http://www.itmb.com) of the Amazon Basin (scale 1:4000000). In Quito, La Condamine obtained permission from the jesuites to see (and copy?) the first map of the Amazone, made by father Samuel Fritz in 1690. La Condamine remarks that the map is rather inaccurate, especially the downstream parts; later, he will improve the map considerably.

We embarked on the Manuel Monteiro II (inspected yesterday) and departed at 4.30 p.m. from Tabatinga. After 3.5 h we came to Benjamin Constant. It was already dark. I had to get out of my hammock because the furniture of an indian family had to be put on board, tables, chairs, boxes, even a cupboard with little glass windows.
La Condamine had a remarkably negative view of the indians he encountered. He acknowledges that there were great differences between them and that his observations were just from a passer-by, but in general, he found them to be rather apathic, indifferent and childish. But also, he seemed to realize that they might have degenerated from an ancestral culture (“...il faut convenir que ses peuples on bien dégénéré de leurs ancêtres.”)
Well, when I observed how they helped each other, putting things on and off board quietly without shouting or scolding, I was amazed and impressed. Did they know each other? It didn’t appear so. In a hammock to my left was a short, strong man with a (gauze) bandage around his head. He helped putting in a full household-furniture. When this family left the next day he helped again. Later, I saw him still in his hammock; he had stayed with his own family. In the hammock to my right was a woman from Tabatinga who spoke spanish. She was going to purchase cloths in Manaus for her shop. They were all so very kind and seemed to accept that Hilbert and I were lying amongst them. I think our sons lying on the upper deck had the same experience. What a pity we couldn’t speak their language or portuguese.
(Here, it is fair to say that for 600 reals (200 €) we rented a cabin where we could put away safely our 4 backpacks and where we had our own shower and toilet!) 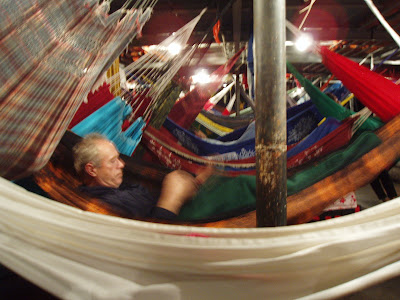 Hilbert in his hammock
At midnight the lights went on again and the “Policia Federal” came on board: young, well-trained policemen, very different from those we would meet later in Guyana or Surinam. They searched every corner of the boat for gold, weapons or drugs. One traveller was handcuffed and taken off-board.

At 5 o’clock in the morning we made a stop at Sao Paulo. The captain, a young woman, seemed to know all her passengers. She gave short orders that were executed promptly.
For La Condamine Sao Paulo was the first portugese mission. From here on he would travel in larger and more comfortable canoe’s. It would take him 5 days and nights to reach Coari. It would take us one and a half day. See map in the posting of 9 April 2007: “In preparation of following La Condamine’s footsteps”.

At 5 o'clock in the afternoon we made a stop at San José, where an old mission was standing on the high river bank (not mentioned by La Condamine). Now, the river starts to live: we hear birds in the woods, see herrons and oropendula's flying over and see dolphins. Between a quarter to and a quarter past 6 it became dark. Time to enjoy a beer on the upper deck with our sons (Hilbert-Jan and Jeronimo) and the few tourists on board: 4 argentines, 2 swiss girls, a couple from Madrid and a brazilian student from Florianopolis, who had studied agro-culture for a year in Berkeley. Asked about deforestation in the Amazon basin, he said he was more concerned about the loss of forests and biodiversity along the Brazilian atlantic coast, where only 10 % of a unique biotope was left..... 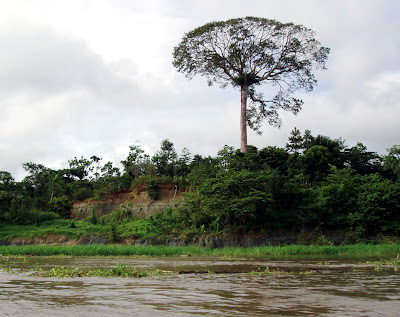 A Samauma tree
One day on the Amazon: 22 April 2007
3.30 am. We stopped at Fonte Boa. A lot of fish was taken on board. I am sleeping in my hammock in my jacket and long trousers and with socks and I am still feeling cold. Next to me sleeps an indian in his T-shirt, a short and with bare feet.....
5.30 am. It is raining lightly. Everybody is still asleep. The surface of the Amazon is clean, no floating truncs and branches; no bird to be seen.
6.00 am. Every now and then we pass a little cabin on the river bank. From the wash hanging out it is clear that people are living there. No boats to be seen. We are going south. We pass some side creeks and suddenly the water is covered with small, floating islands of water hyacinths. We pass a rather large village, Tamaniqua (not on my map), where a boat as large as ours is just leaving, going upstream; not many people to be seen. 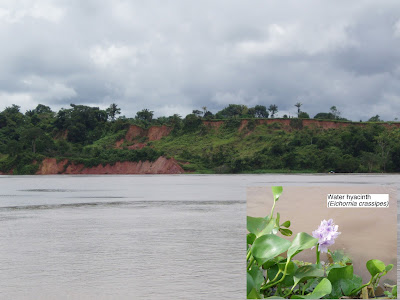 The water hyacinth
6.45 am. Breakfast with papaja, sweet coffee, rice porridge and a sandwich with cheese.
7.30 am. We pass close to the river bank and see many birds: herrons, cormorants, kingfishers and oropendula’s.
8.00 am. The boat slows down allowing a small boat to bring people and a load of fish. We pass a large, floating oil-platform.
10.00 am. We pass a large boat with many people on board. For the first time since Leticia we see a big house, a villa with a large, red roof surrounded by fields with cows and banana plantations.
11.00 am. We overtake a cargo boat with gas containers. We pass Uarini from where a similar ship as ours departed, going downstream in front of us. The southern river banks are rather high and red, the northern are low and brown-coloured.
12.30 pm. We pass the mouth of the Rio Japura.
12.45 pm. Our boat and the one in front of us make a stop at Alvaraes. A third passenger ship is coming towards us. We have not seen so much activity since Leticia.
13.00 pm. Our boat slows down. A small, aluminum boat with one man comes alongside. From where? An automatic rifle is handed over to him and he starts to follow our boat on short distance.
13.45 pm. In front of us another small boat is coming towards us with some passengers; suddenly they change direction and go to the riverside.
14.00 pm. The aluminum boat comes alongside, a handcuffed man is taken off-board; together with two other police men they depart. Where to? Our boat is going full speed again. 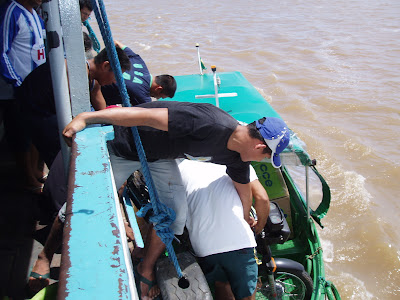 Policemen taking a handcuffed man off-board
14.30 pm. We pass Tefe but cannot see the town. The southern river bank is here at least 50 m high.
16.00 pm. The river is now very broad (2 km?). We are going south-east. Far away we see a thin-lined horizon as we are nearing the Atlantic Ocean.
17.15 pm. Beautiful sunset. A large cargo boat again loaded with gas containers comes slowly upstream.

Not once have we seen cargo boats transporting wood or have we seen sites on the riverside where tree truncs are being accumulated, as we will later see in Surinam.